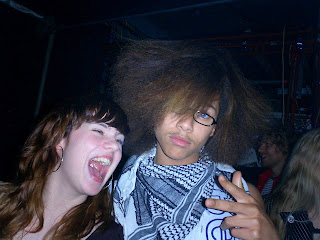 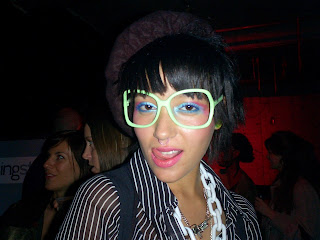 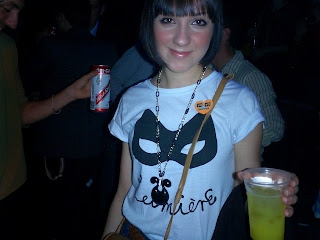 This has been a week of gig-going with the Pet Shop Boys on Sunday, and the Teenagers and Ping Pong Bitches on Wednesday night. When I go to gigs I like to spend as much time checking out the audience as I do watching the band. At the Pet Shop Boys the audience was sadly lacking in sartorial finesse, all I clocked was a sea of jeans and tees and… rucksacks? What was in those mysterious bags, their packed lunches? Dull, dull, dull. In stark contrast,The Teenagers’ audience wore a mash-up of leopard leggings, denim cut-off hotpants, graphic Stussy tees, and baseball caps with just a light dusting of fluoro (not all in the same outfit but it could easily have been).

The great thing was the crowd had dressed up to be seen so were super-flattered to have their photos taken and completely up for striking a pose. The band, a trio of young French hotties rocked the house but as soon as they came off-stage I exited to the tube and raced to Notting Hill as fast as my Oyster card could carry me. I arrived just in time to catch electro-clashers Ping Pong Bitches at Death Disco, the weekly indie night at the Notting Hill Arts Club. The look here was more studied compared to the thrown-togetherness of The Teenagers’ crowd – trench coats with berets mixed with 80s Jesus and Mary Chain look-alikes. The Ping Pong Bitches are three girls and a guy, all (I think) the wrong side of thirty but boy do they work it. Tight-ass jeans, mirrored aviators, pink socks and sparkly ties. These bitches have their don’t-mess-with-us stance down pat and all that matters to them is their own perceived hotness. Conclusion? When the music rocks this bad, and the band looks this good, everyone grooves to the same tune.