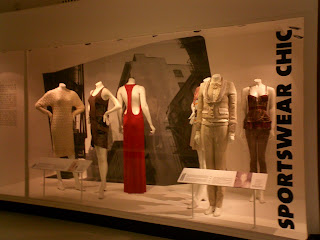 I was invited to a preview this morning of the V & A’s New York Fashion Now exhibition which opens tomorrow. It celebrates the new names that have emerged in American fashion in the five-year period from 1999-2004. I have to say it’s not the most dynamic exhibition. It’s in the smaller gallery and all the exhibits are behind glass. Some film footage, designers sketches or even exciting music could have been employed to give it more drama but it’s all very clean, stark and simple.

Alongside the likes of Proenza Schouler, Behnaz Sarafpour and Zac Posen are lesser known labels like Mary Ping (great name!)and Costello Tagliapietra (breathtaking drapy jersey gowns). Some of the terminology confused me though. Designers are grouped in sections called things like Sportswear Chic, Atelier and Avant-garde. OK, ‘avant-garde’ I get but I’m sorry, how can you call Derek Lam and Proenza Schouler ‘sportswear’? I know US sportswear isn’t the same as UK sportswear (to us sportswear is a shell suit, to them it’s smart separates) but this is luxury dressing at its most formal!

It was interesting to see representation by Cloak and Miguel Adrover, two brilliantly original but short-lived labels that didn’t survive the post 9/11 economic downturn. If you’re a fashion student or really into the US fashion scene this is worth a look. If not, get the accompanying book New York Fashion written by the curator Sonnet Stanfill. It goes into more depth than the exhibition and is a great deal more visually satisfying.
New York Fashion Now, 17 April – 2 September 2007, FREE

Slacks are back Ooh controversial…