Worry about it later 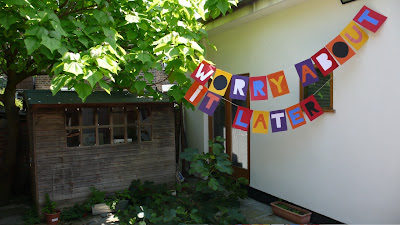 I’ve always been a worrier, even though in the grand scheme of things I don’t have that much to fret about (ain’t that always the way?). I’ve had a charmed life, never suffered too greatly and always managed to overcome the problems that did come my way, but that doesn’t stop me worrying about the ‘what ifs’. So when I decided to ‘make an encouraging banner’ for Learning To Love You More. I didn’t have to think too long and hard on the message I wanted to convey. ‘Worry about it later’ is a motto I made up years ago* and it’s a handy one for those interfering niggles that won’t go away. You tell yourself that now is not the time to worry, arrange an appointment with yourself to ‘worry about it later’ and of-course, by the time later comes round, your mind is usually engaged in some other activity of a non-worrying nature. Well it works for me.

I sent my banner to Nicky Peacock who is putting it in an exhibition at the Co-operative Building in Middlesbrough from 25th July. I can’t make it up to Middlesborough but if you’re in the area, do visit, it will surely be inspiring.

*and also a lyric from my favourite Clash song

The 123 tag The rise of unisexual dressing