Trend report: What to steal from Dior men fall 2020 “I’m a commercial artist. I think things are going so well because I’m not afraid to do things that are commercial.”  And therein lies the success of Kim Jones. His Dior men’s fall collection shown last Tuesday was highly anticipated by me and my fashion cohorts as soon as the collab with Shawn Stussy was announced.

I’ve always liked Kim Jones’s cultural references, most likely because we’re from the same micro-generation. At Louis Vuitton and Dior, his most resonant collections for me were the ones that referenced Christopher Nemeth, Jean-Michel Basquiat, and Raymond Pettibon. And as a fellow house and disco head (again, a generational influence), his choice of musical collaborators is another draw. A true creative director, his knack of threading together the sensorial and storytelling elements with creative savoir-faire has put him at the forefront of today’s luxury-meets-street convergence. 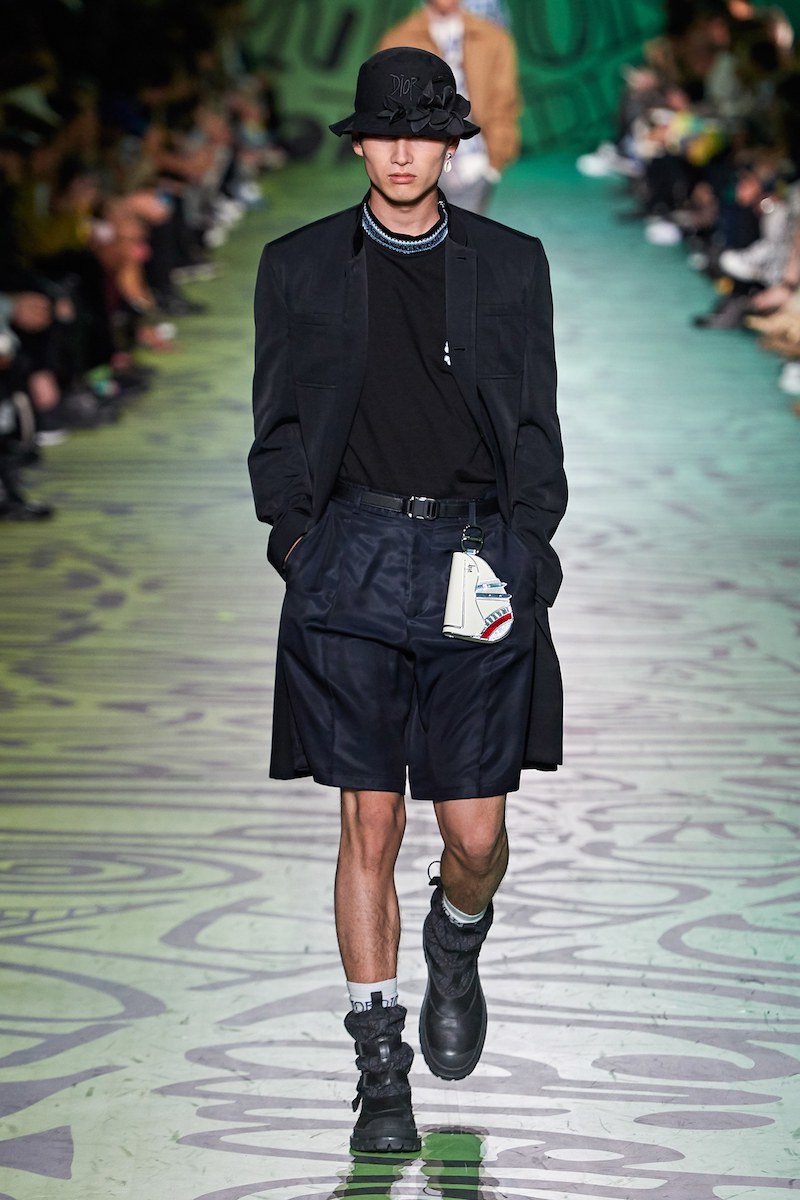 The Dior men’s fall collection was a much-needed burst of escapist joie de vivre in the week before the UK elections. It took place during Art Basel Miami, opposite Miami Beach’s brand new Rubell Museum. These seamless juxtapositions are no accident. They’re meticulously thought out, designed to reinforce the art aspect of the collab and mesh nicely with Dior lore – Monsieur Dior was, after all, a gallerist before he was a fashionisto. Positioning Shawn Stussy as an artist and not just a streetwear entrepreneur was key. 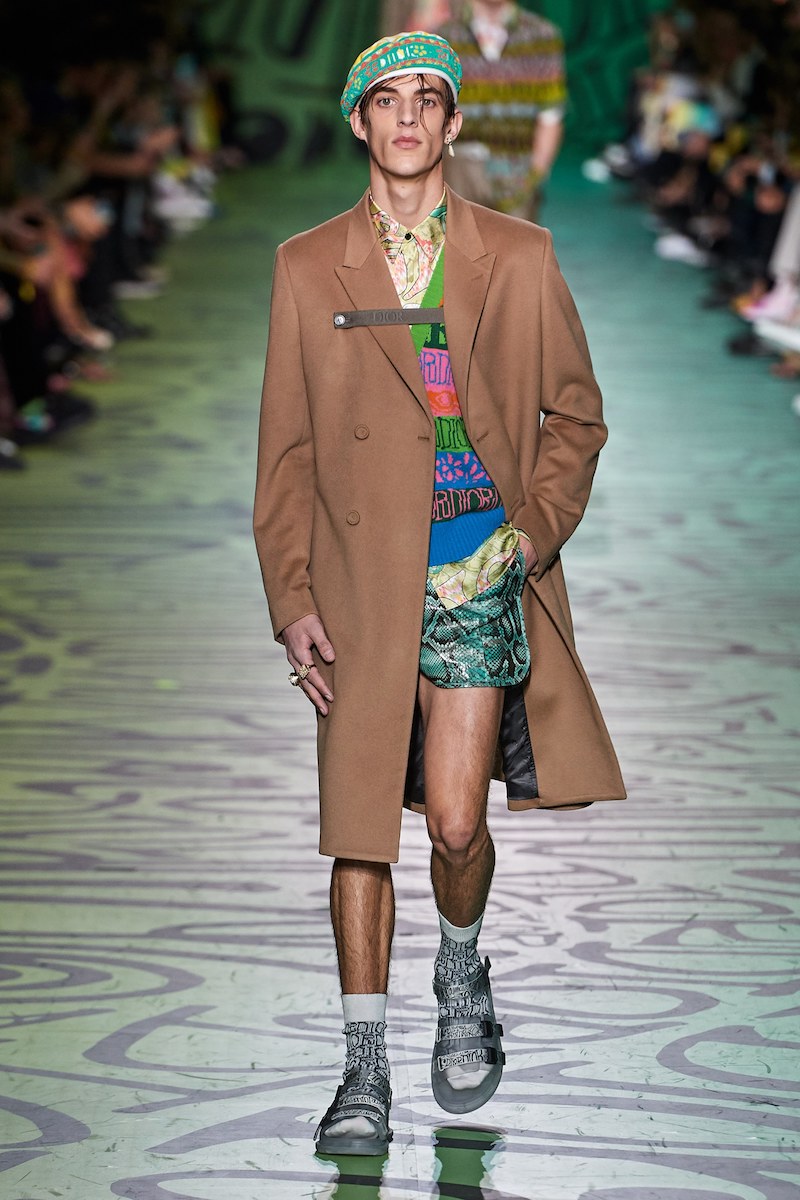 On which note, who exactly is Shawn Stussy? Ah, well here we have the masterstroke of KJ genius. If you want relevance and authenticity, it’s right here. Long story short, Shawn Stussy founded Stussy back in the early 80s. By the mid-80s it was everywhere in skate-streetwear circles, although the ‘street wear’ term and movement had yet to be defined as such. For my micro-generation, it was quietly iconic. Scrappy, attitude-y, sexy and under-the-radar. In the UK it was distributed by Gimme 5, the equally scrappy company that springboarded many young skate-street brands, bringing the likes of Supreme and A Bathing Ape to mass popularity.

Jones was part of that scene in the 90s and was an early Stussy advocate, hence the Shawn Stussy connection. Shawn sold the brand in 1996 and that’s the genius part. Rather than collaborate with Stussy as it is now (why bother when he had already done something similar with competitor Supreme at Louis Vuitton?), he chose to work with Shawn, not as a ‘brand’ but as an artist. He could still tap into the heritage of old Stussy but in a much cooler, artistic way. 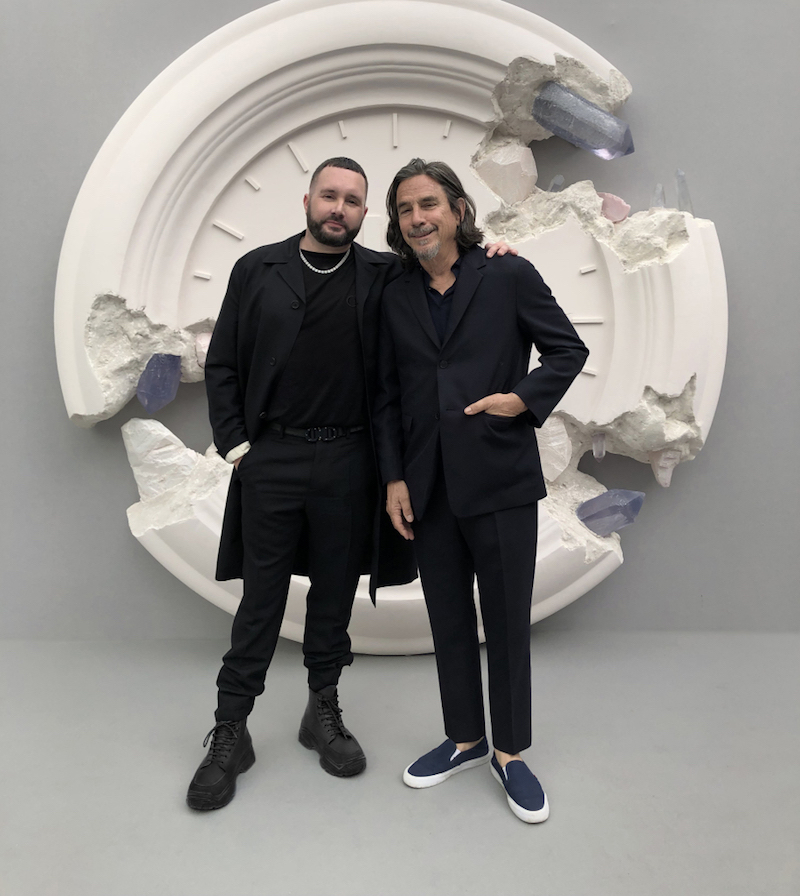 Shawn was enlisted to doodle the Dior logo in his playful Sharpie style, which was recreated by Dior using stencils and rare artisanal techniques. What are these techniques? Well, no one seems to be able to describe them, but here’s a fab demo, narrated by UK designer Edward Crutchley. And I love this video of Shawn and Kim together…) 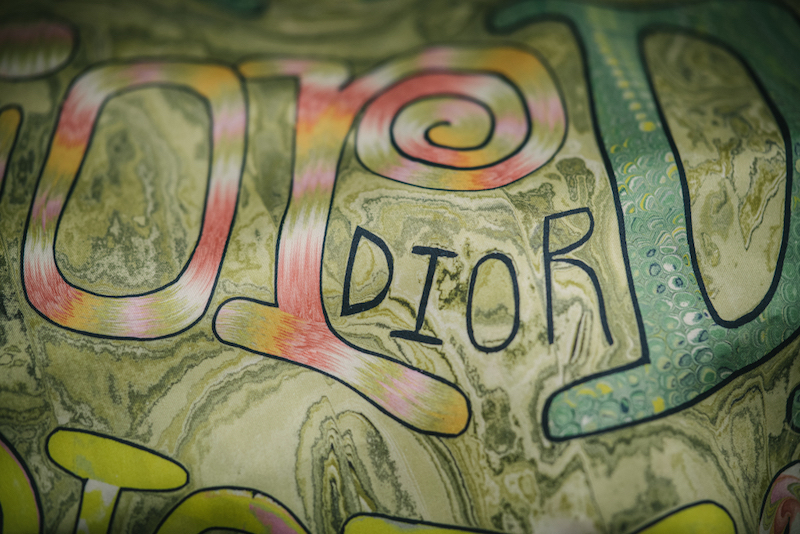 To accompany Shawn Stussy’s ‘psychedelic surf’ scrawl, the venue walls were covered in Miami-bright graffiti and the soundtrack was suitably hi octane house. And to round everything out (maybe a tad unnecessarily), a special couture-ified ‘AirDior’ Air Jordan sneaker was unveiled, sending the hypebeasts into raptures.

It was all very accessible, summery and rather delightful. And as is now standard at Kim Jones’s menswear shows, there’s no gender discrimination – girls can play too. So here are my picks of what to steal from Dior fall 2020…

CAMP SHIRTS These heavily beaded camp shirts will be a major hit for guys of all ages but can also look great on women. One took 2,600 hours to embroider and the added benefit of weighty beading and embroidery is that it gives extra drape to the finished article. I also like the styling tip of layering two shirts together for contrast. 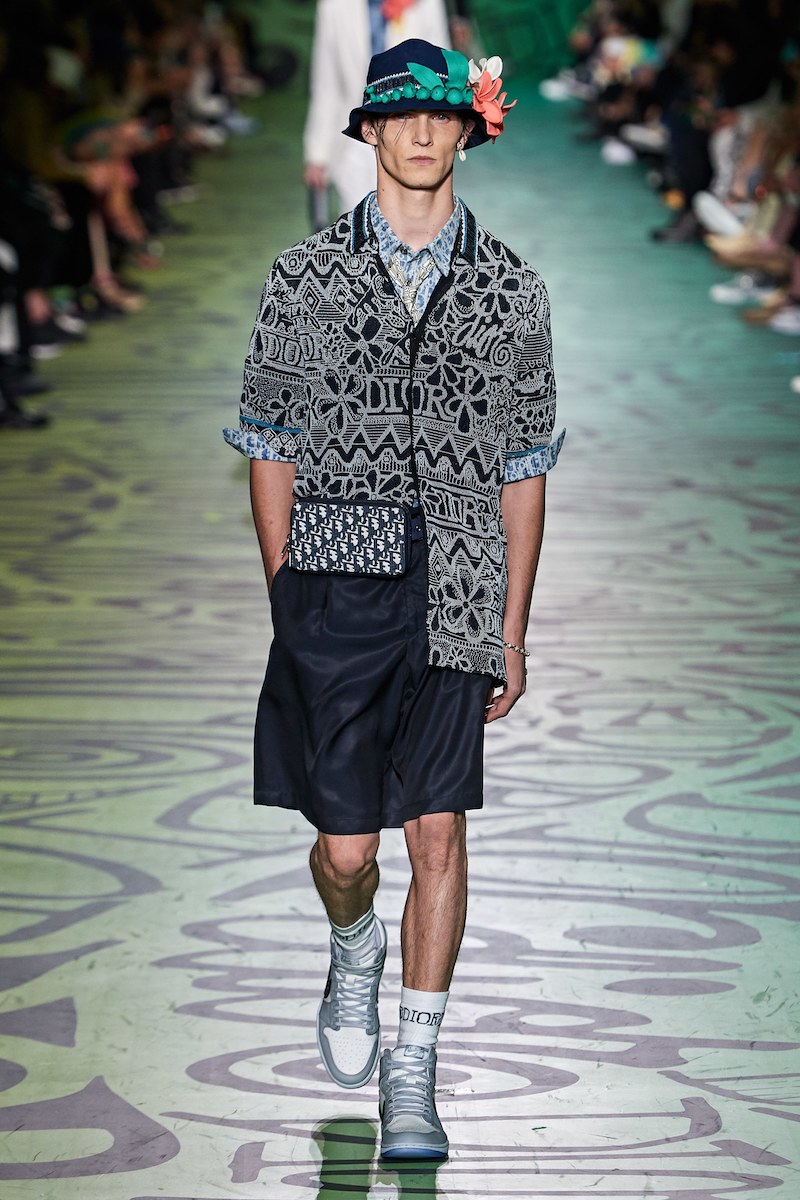 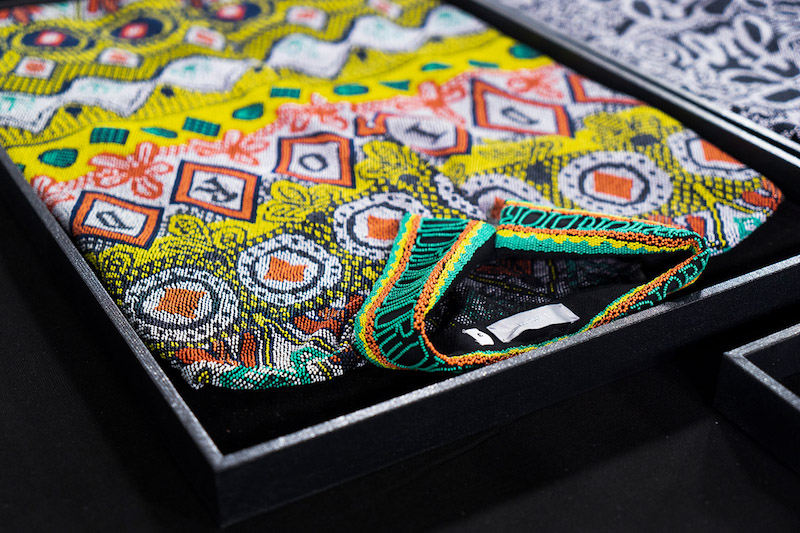 OUTERWEAR To temper the Miami colour palette, we witnessed some great caramel-coloured outerwear combined with skater-length shorts and hi-tops. The logo-lined trench is on my radar and the oversized bomber and menswear topcoat are good examples of Jones’s high-low prowess. 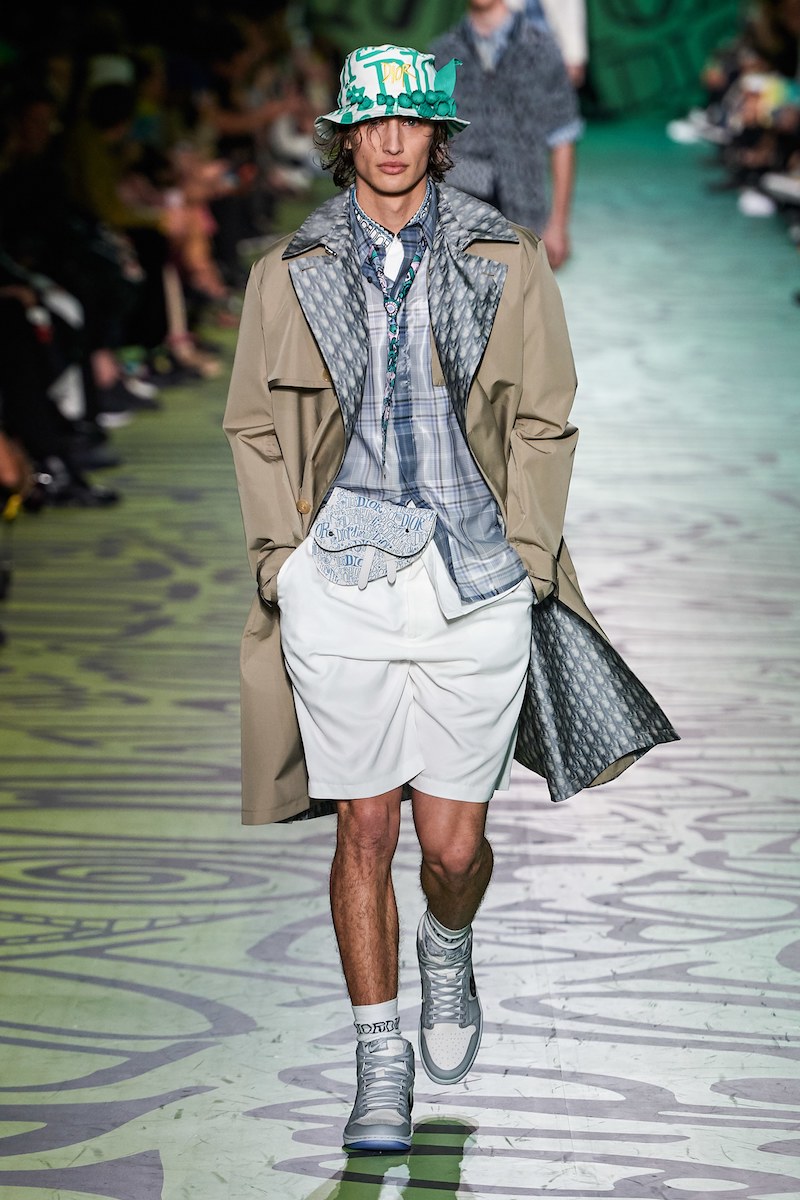 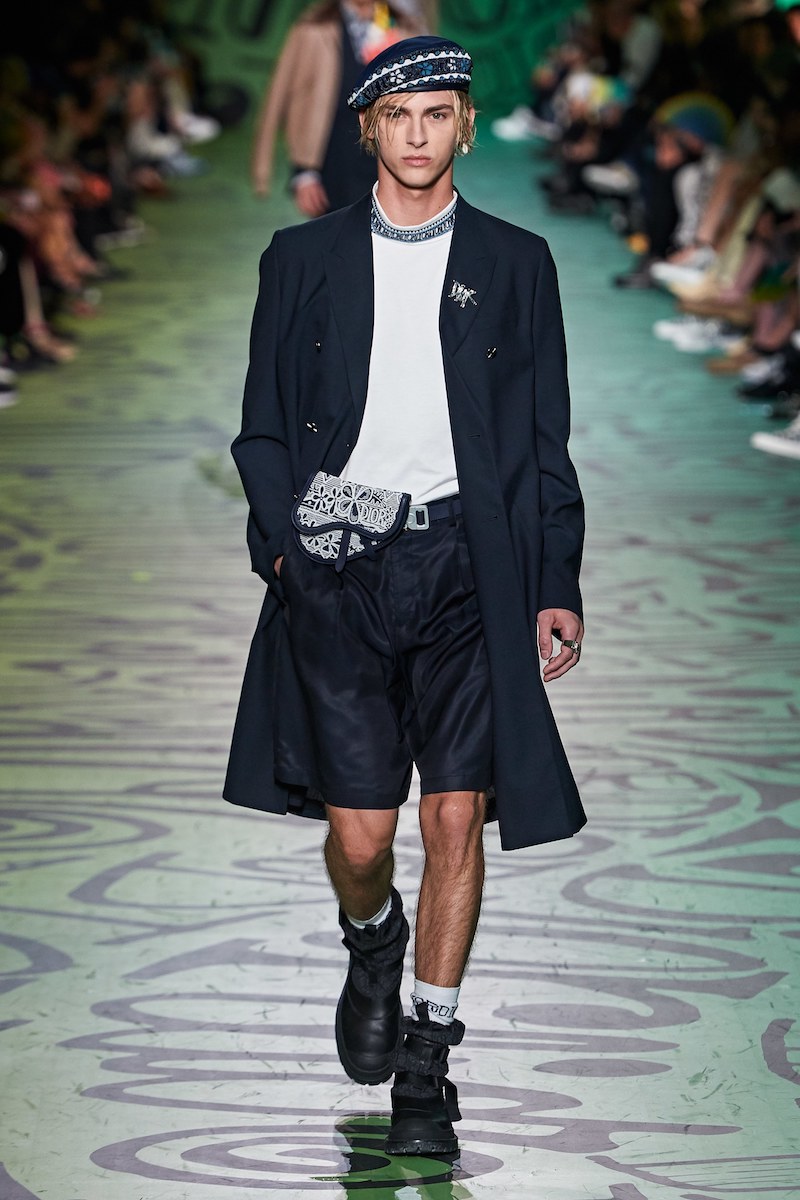 BERETS AND BUCKETS There was an abundance of headgear, designed of course, by Dior regular Stephen Jones. While I love a bucket hat (and there were plenty of trippy-dippy swirl-print ones), I actually preferred the classic dark berets, with their hand rendered Dior logo and subtle beadwork, teamed with minimalist summer-weight suiting and long shorts. 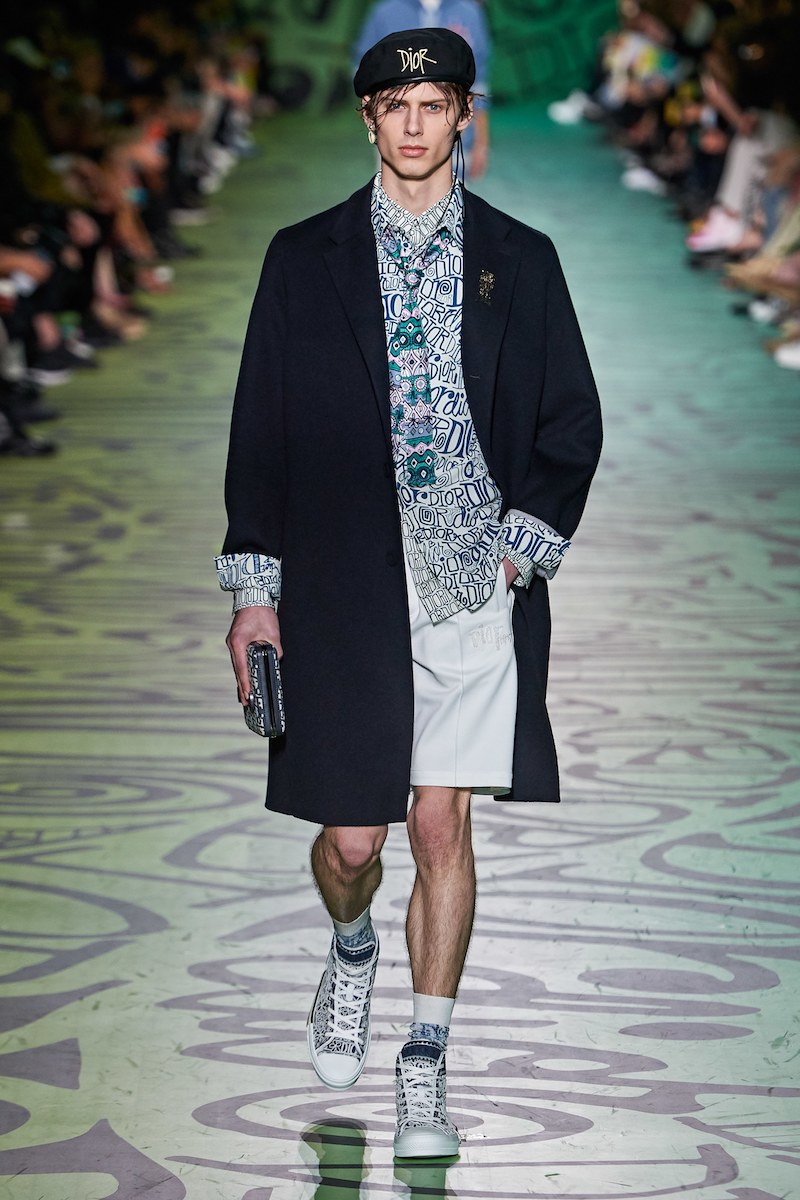 KNITS AND TOTES Expect to see these flamboyant hand knits all over the Fashion Week ‘It Girl’ contingent come spring. The logo totes continue the mania for the many iterations of Dior tote that have been seeded across the influencer-sphere of late. Much more practical than a handbag, they represent the everyday appeal of luxury to new-gen RTW consumers. 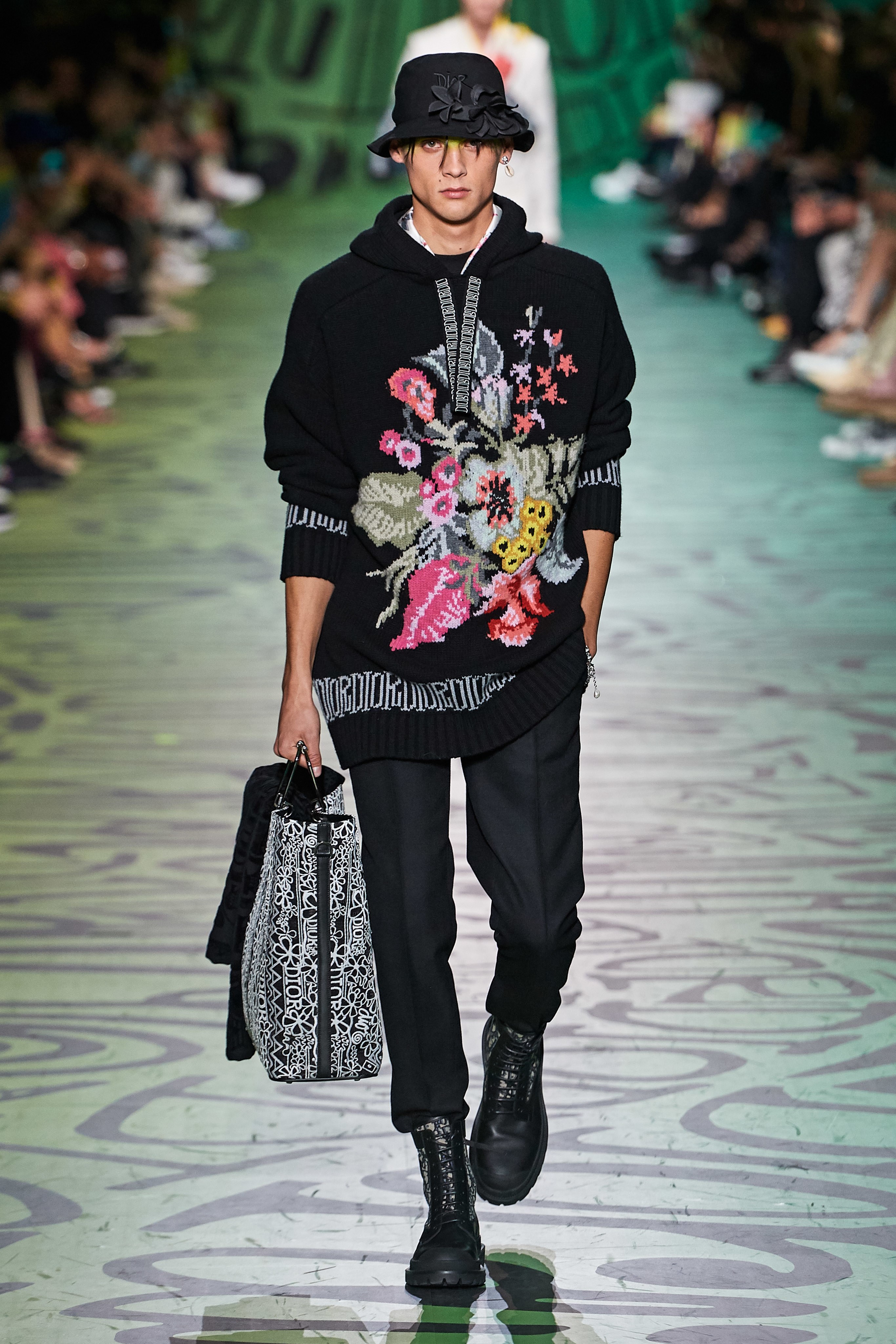 PYTHON PRINT Jones reimagined the women’s Dior saddlebag for men a while ago, and for fall 2020 offers a new python skin version. Watch them fly! If skins aren’t your thing (tsk, pesky vegans), then python print silk separates will be the next best alternative. Coming to a Zara rail near you soon, no doubt…