What are fashion shows for? 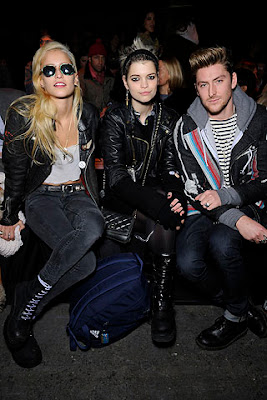 New York Fashion Week is in full flow and London Fashion Week kicks off on Friday. For the designers, months of caffeine, sweat and tears will culminate in a 15-minute crescendo. But who and what are they for?

Back in the olden days, the shows were elite salon events attended by super-rich customers and the fashion press. As time went on they became larger productions, with more editors and buyers witnessing bigger spectacles. More recently, press-hungry celebrities realised fashion shows made good photo-ops and designers (or their publicists) realised that those same celebs could get publicity (leading to sales) for them. Fashionista.com recently reported that celebrities like Chloe Sevigny and Mary-Kate Ashley can get paid five figure sums by designers to show up in their front rows – and there we were thinking they did it for the love of a Balmain harem pant. As if!

And now we’re in the age of the live-streamed show where anyone can watch the show from their couch or desk, or even Times Square if you’re an Alexander Wang fan. Fashion Week is tough on fashion editors. It’s not all champagne and air-kisses, there’s a lot of running around, a hell of a lot of waiting, plus in between, the trips back to the office to attend planning meetings and sign off page proofs. Eating and sleeping rarely factors. Oh to be able to sit in the office and watch it all online like everyone else! Could this happen?

Alas, not for a fashion editor. Because the days of attending the show purely to report on the clothes are long gone. These days, a fashion show isn’t about what’s on the runway at all but the ‘show’ happening front of house and backstage. The show isn’t just the models on the runway, it’s the celebrities, the editors, the backstage crew. It’s the overheards, the atmosphere, the hullabaloo. Social media has changed Fashion Week in the space of one season. WWD published an article on the influence of social media at fashion shows and reports that some brands now have as many as 40% of bloggers taking up press head-count. Those designers embracing social media (live-streaming, tweeting, blogger-courting) are also doing more to show the backstage and pre-show buzz. Marc Jacobs’ president Robert Duffy has spend the last two weeks Twitpic-ing model castings, set-building and other insights into the Marc Jacobs show build-up.

So are fashion shows morphing from exclusive industry-only events to become more of an entertainment thing? Yes indeed. It’s all about the marketing and commercial opportunities now, brought on by both the recession and the online revolution. The next stage is brands opening up to the public who in turn will, hopefully, open their wallets. On February 18th Diane Von Furstenburg puts on a separate show for Amex cardholders from which the $150 ticket price goes towards Amex’s $250,000 donation to the CFDA/Vogue Fashion Fund. Guests will watch models present the spring-summer collection and theoretically rush to buy whatever tickles their fancy in store shortly after. Meanwhile Proenza Schouler will make their AW10 handbags available to preorder online immediately after their show.

In this new era, old school fashion editors won’t like being lumped in with the ‘civilians’ but while the majority of brands can see the worth of going public, a few are still resistant. ‘We believe that luxury breaks down when access is in excess,’ Luca Luca president Yildiz Blackstone told WWD. My guess is that in time, there will be a split, perhaps with Fashion Week as we know it being used for entertainment and commercial purposes, and a spin-off being created for the trade press and buyers.

What do you think?