Thanks to everyone who bid on the wonderful one-off Secret Tees produced by some of the country’s best creative talent. Now I can reveal who designed what for Harvey Nichols’ Fashion’s Night Out auction, with all proceeds going to my favourite charity, Kid’s Company… END_OF_DOCUMENT_TOKEN_TO_BE_REPLACED

Vogue Fashion’s Night Out in pictures

Did anyone go to Fashion Night Out? Wasn’t it a blast? I had so many things I wanted to go to, from checking out Lulu Kennedy’s ‘Honolulu’ at Liberty, to getting my nails did by Sophy Robson at Chanel, to whizzing round Rupert Sanderson’s roller disco. In the event, I mostly got waylaid in various spots around Bond Street shooting the breeze with every blogger in town… 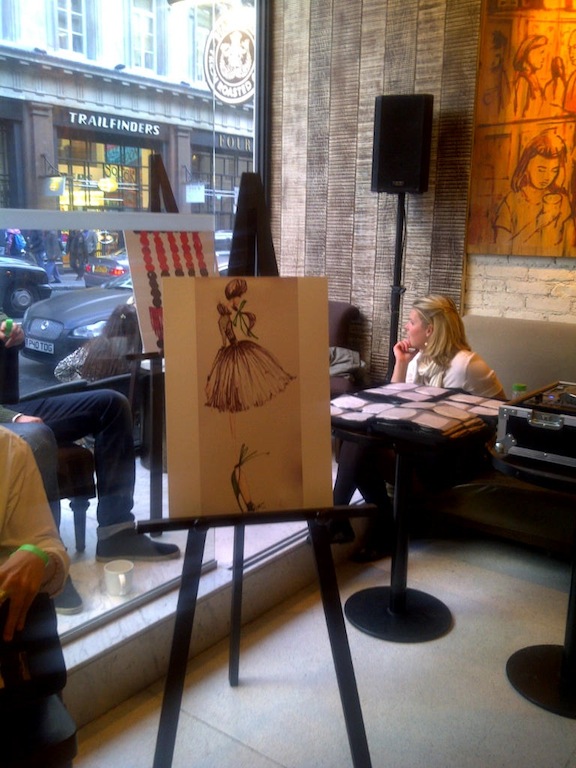 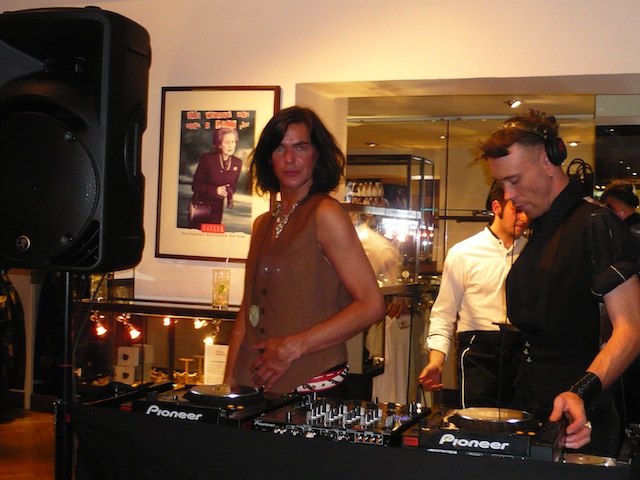 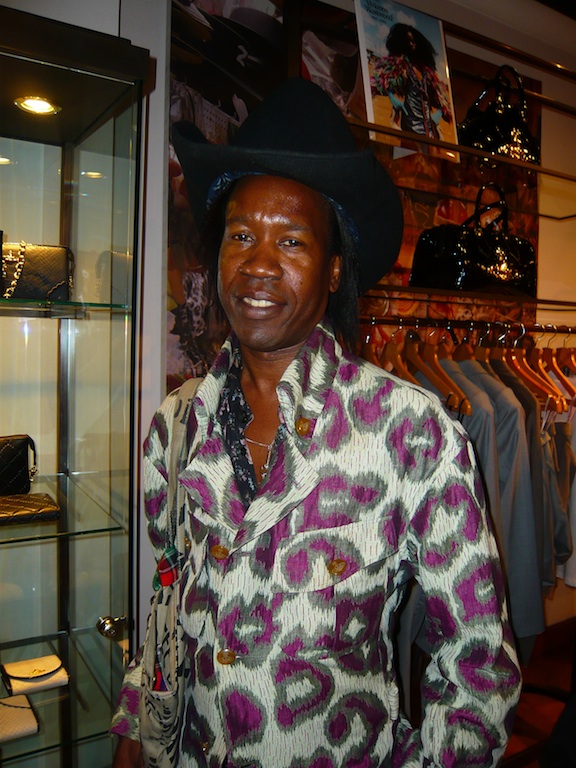 Good to see Phillip Sallon back on the social circuit 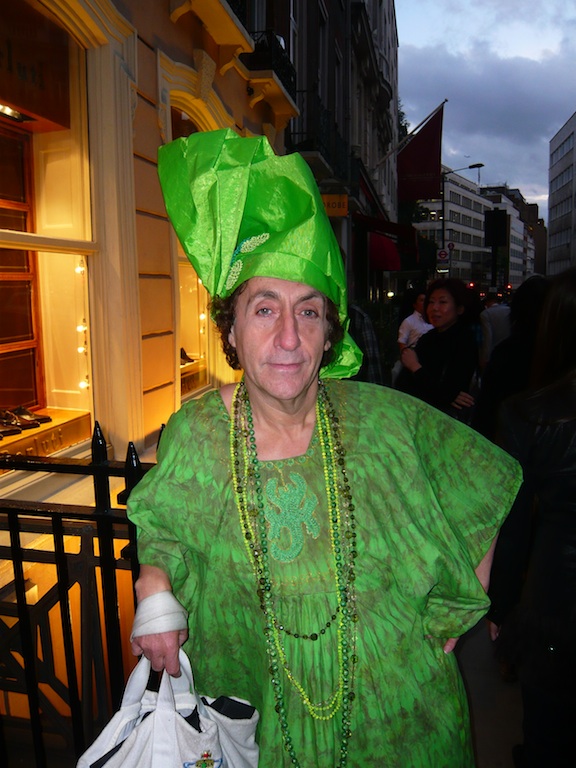 Alcohol was served in anything but glasses: punch in a teacup at Moschino, cocktails in coconuts at Lulu Kennedy/Liberty and jam jar bevvies at Harvey Nichols 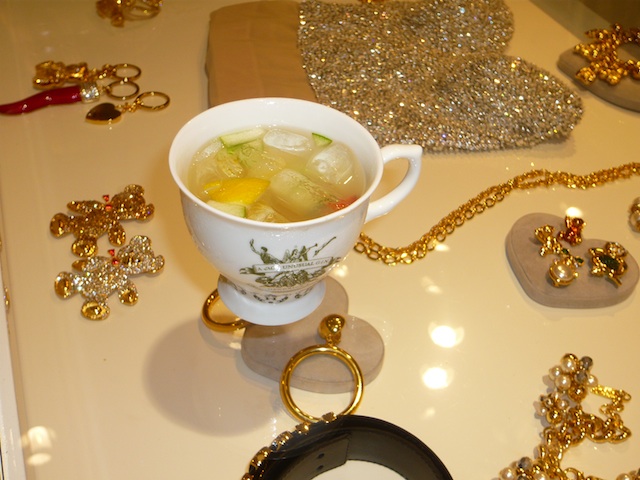 I spy an Hermes horsebox – with the longest queues ever for ‘bangle bowling’ (bowl a bangle into a scarf-covered riding hat and win a paper bangle!) 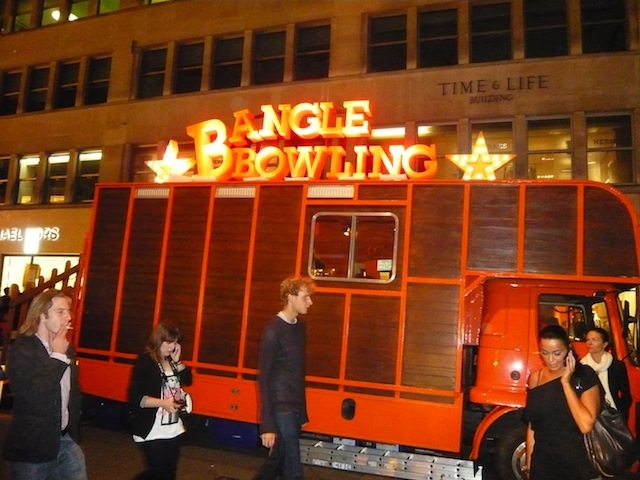 Rupert Sanderson was hilarious fun (but not so hilarious for poor Katie Chutzpah who sustained a fractured-elbow-shaped injury). Here’s a photo she took of me doing my best Olivia-Newton-John-in-Xanadu impression. 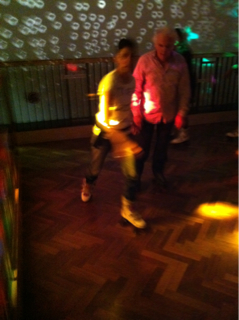 I loved Netaporter’s idea of a shoppable ‘window’ where punters could win prizes. Here’s my photo from London: 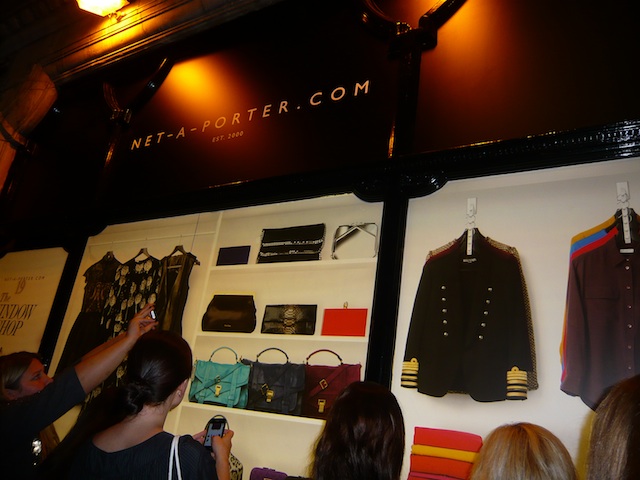 And here’s the NYC version: 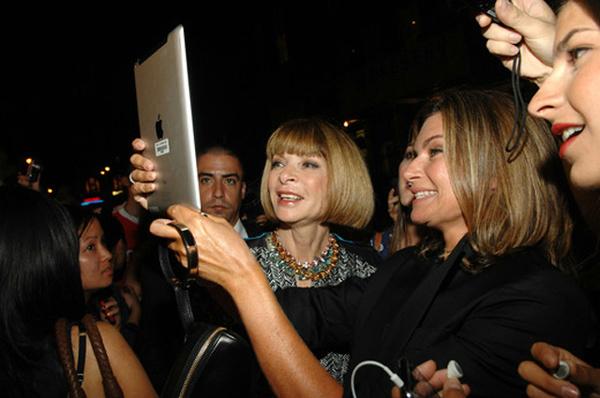 And finally, to Harvey Nichols’ fashion fairground, a complete madhouse of London’s craftiest designers customising FNO tees, bags and anything else in sight (J W Anderson even stuck Harajuku stickers on a Celine bag and someone’s boots). My Secret Tees looked great of course and the bids are already stacking up. Feel free to bid if you fancy winning a one-off tee from one of London’s coolest creatives. All profits to Kids Company – yay!) 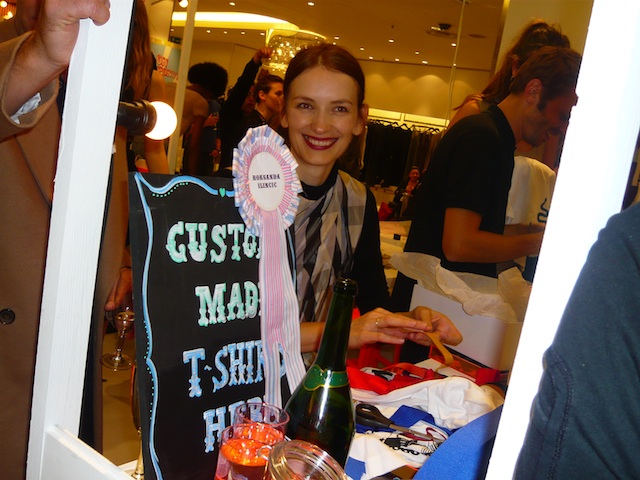 Pin the ponytail on Karl’s head 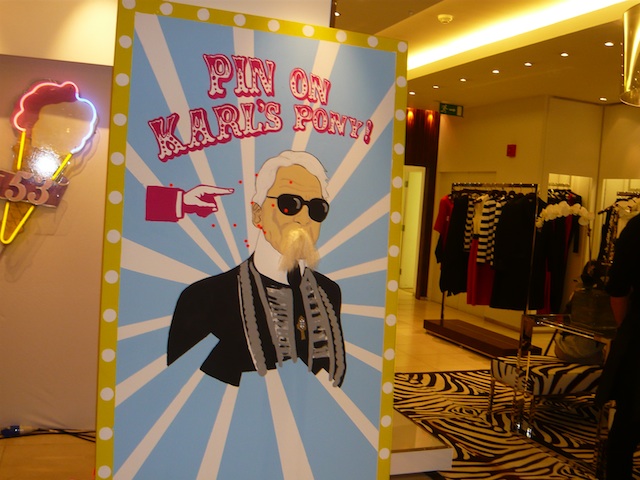 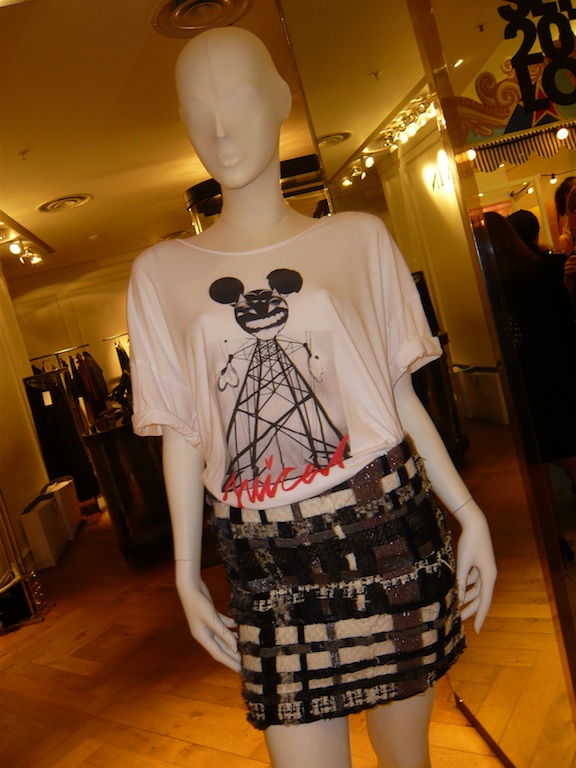 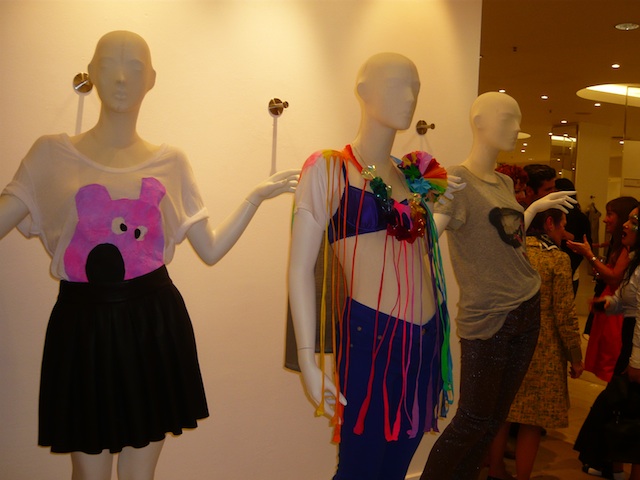 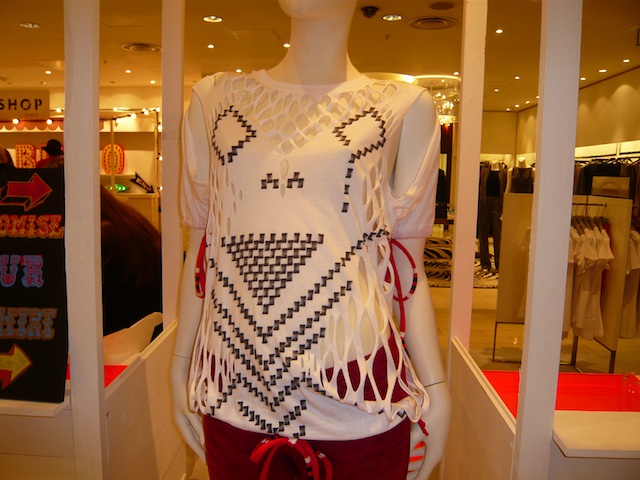 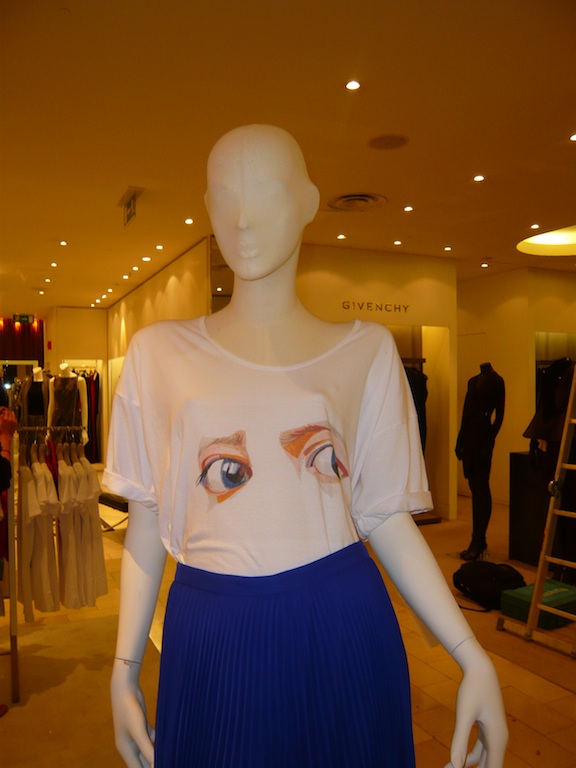 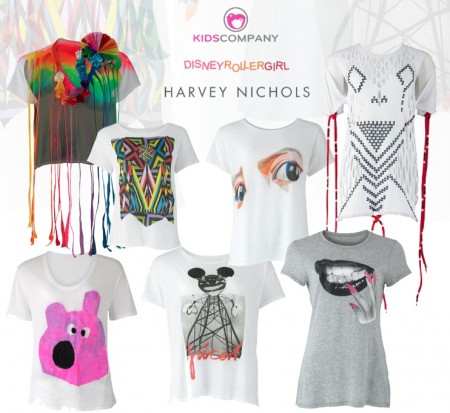 Vogue Fashion’s Night Out is almost upon us and I said I’d give you the final low down on my Secret Tees project with Harvey Nichols. Well ta-da… here it is! I asked Sophy Robson, Dr Noki, Bip Ling, Quentin Jones, David David, Fred Butler and Yang Du to create a one-off T-shirt to be auctioned by Harvey Nichols for FNO, with all proceeds going to Kids Company. END_OF_DOCUMENT_TOKEN_TO_BE_REPLACED 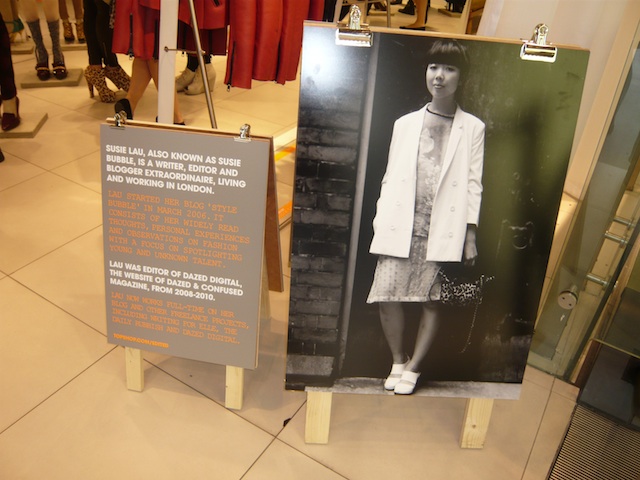 Last Friday saw the latest incarnation of Topshop’s Edited space in Oxford Circus and Manchester. Susie Lau (AKA Bubble) is the latest ‘taste maker’ to select her pick of TopShop’s strongest pieces to sit in their own area of the store for time-poor, fashion-forward customers to snap up. END_OF_DOCUMENT_TOKEN_TO_BE_REPLACED