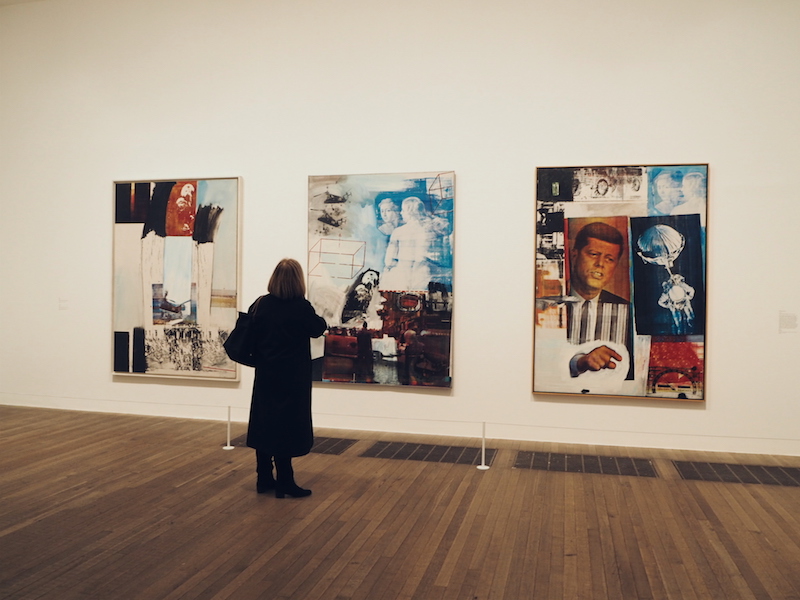 I’m a huge fan of Robert Rauschenberg and I’ve been excited about this retrospective at Tate Modern all year. It doesn’t disappoint. For collage and mixed media enthusiasts it’s got the greats from ‘Retroactive II’ to ‘Ace’ and this is an immense opportunity to study each and every brushstroke, news cutting and 3D fabric scrap up close. Keep looking and you keep seeing…

My love of collage came from Robert Rauschenberg and this explores his common themes and motifs in detail. Newspaper and comic strips were a way to bring colour to his monochrome work and found objects in his ‘combines’ were a device to ensure no one element dominated a piece. Originally a chemistry student, he was an accidental artist and it was Josef Albers, his art school teacher at Black Mountain College in North Carolina who encouraged him to use everyday found materials. Mirrors were a clever device to bring an outside element into the picture (sadly no selfies allowed in this exhibition) and parachutes and umbrellas reference speed and flight in the modern new world. 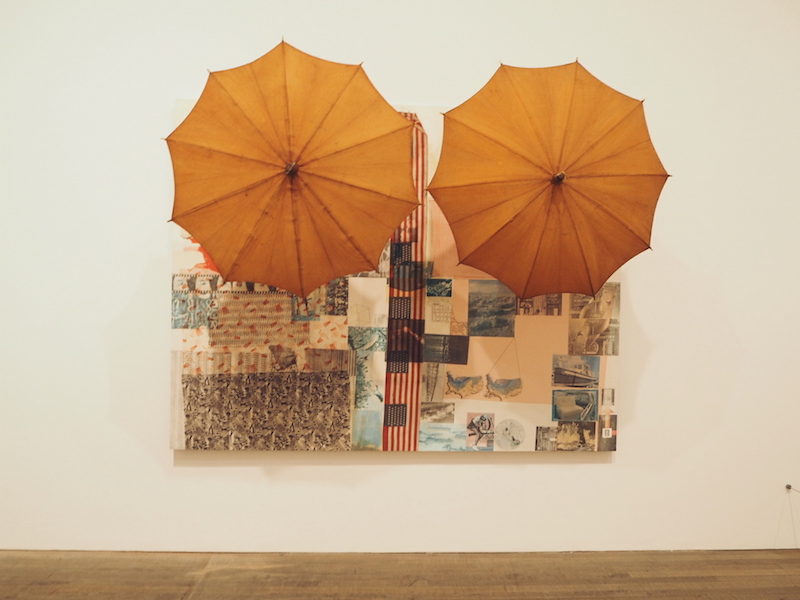 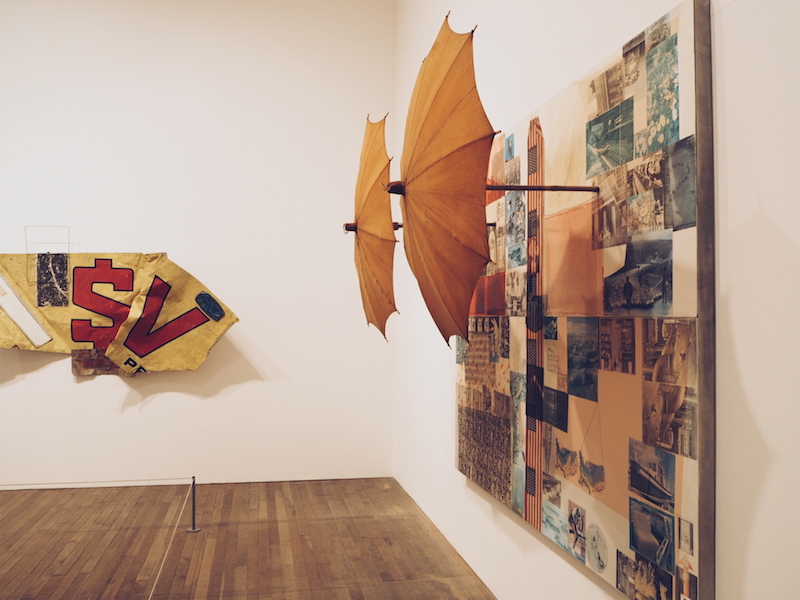 BELOW Charlene – I could look at this for hours 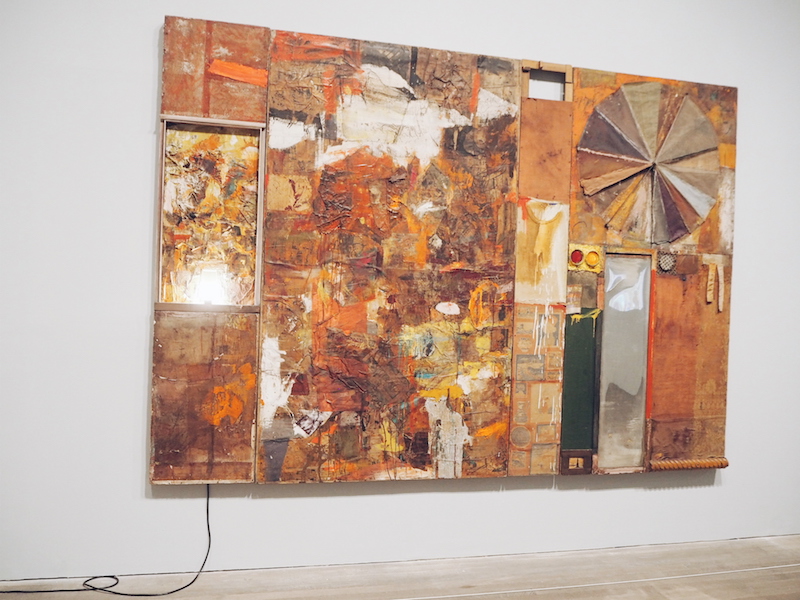 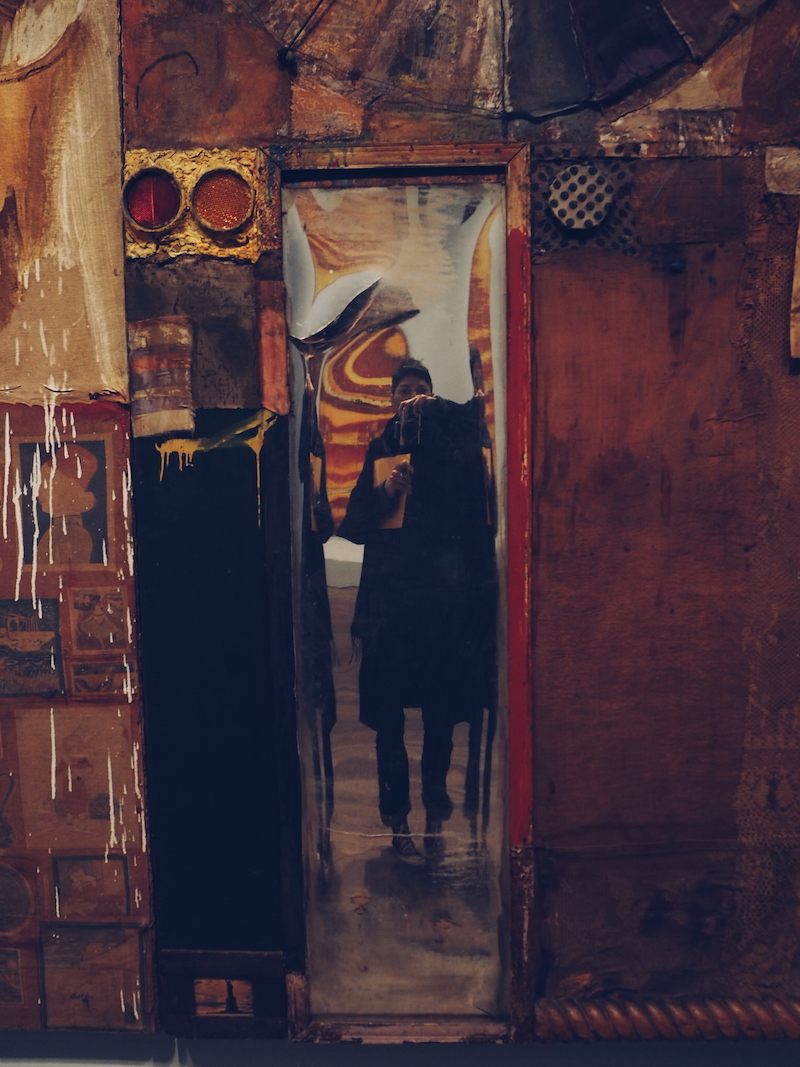 BELOW I love the sock and the drippy paint… 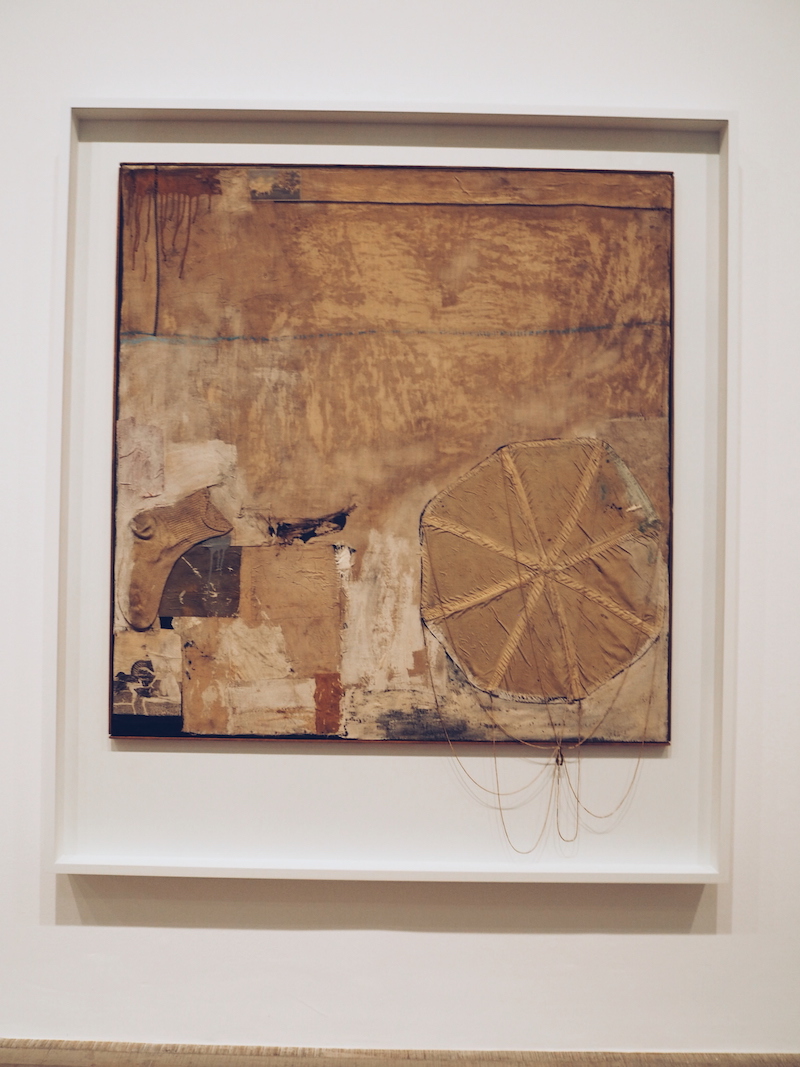 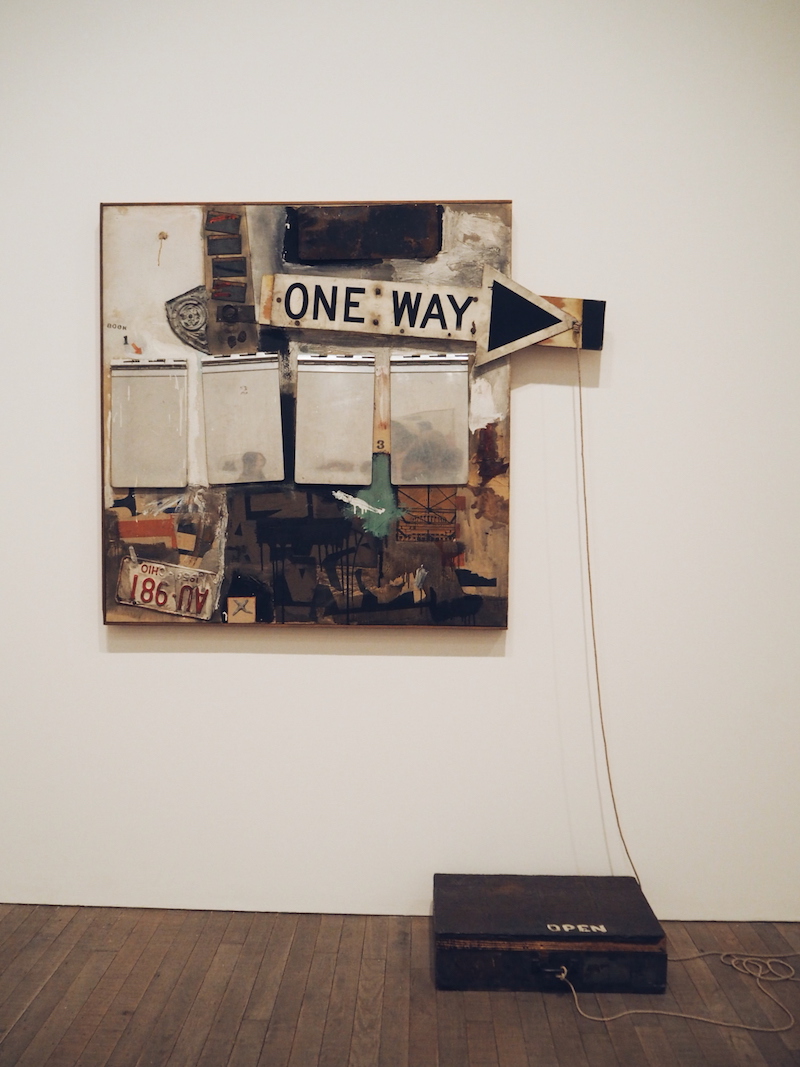 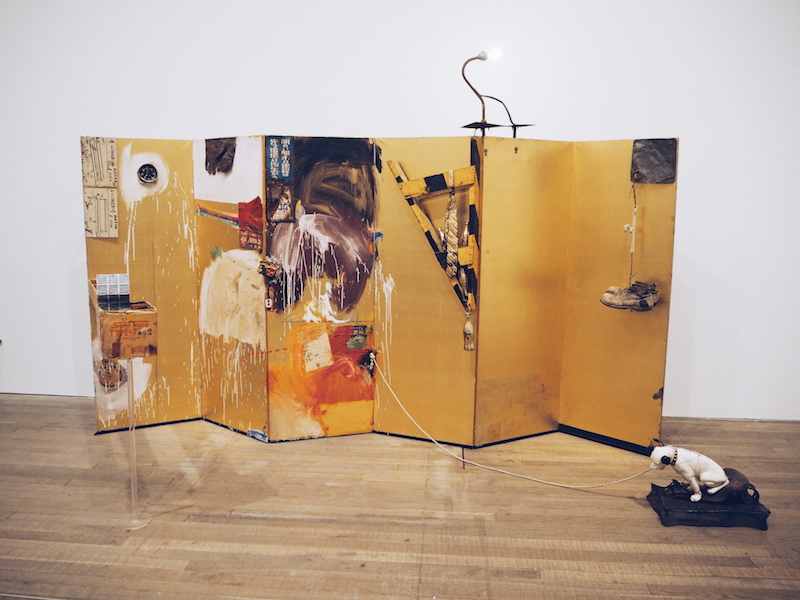 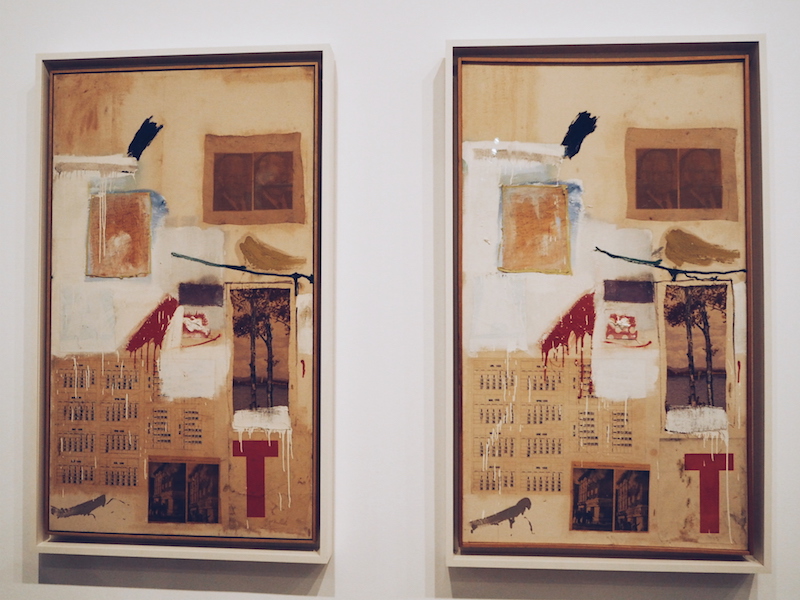 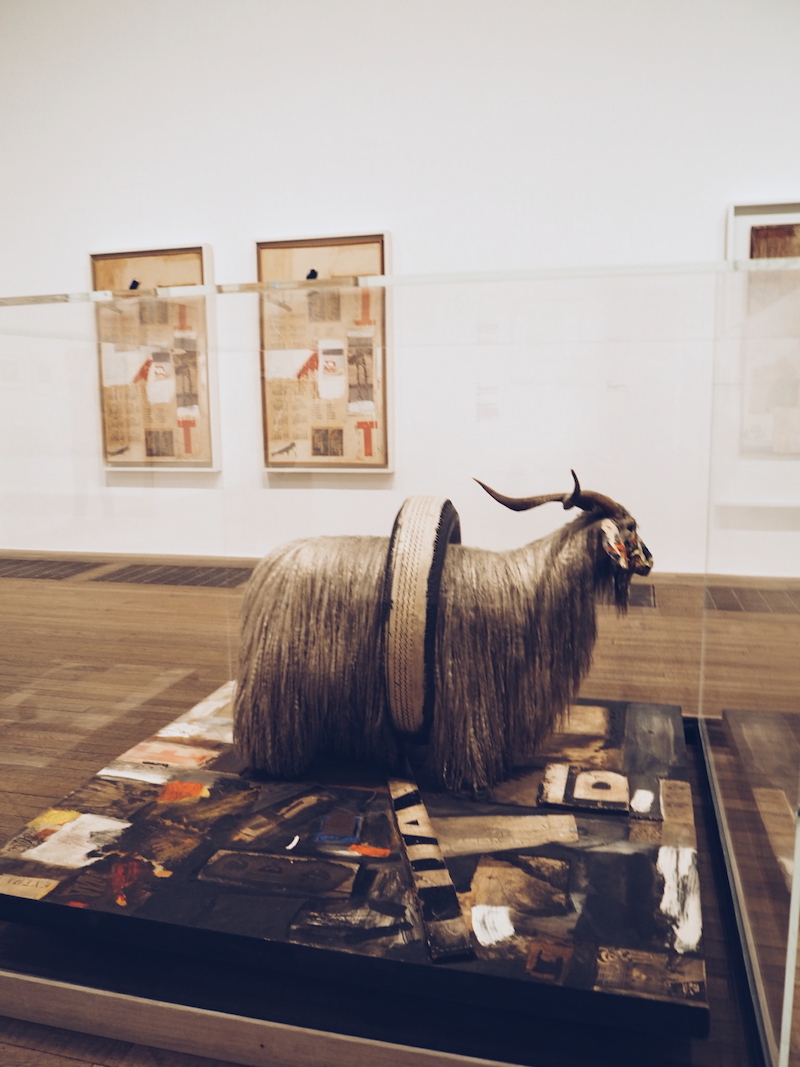 For me it was amazing to stand in front of ‘Retroactive II’ (the JFK one, below) and take in its arresting presence of political-pop iconography and graphic composition. I also discovered ‘Signs’, a magnificent collage originally commissioned for Time magazine’s beginning-of-1970 issue, but they considered it too political so didn’t use it. Fools! Instead, Rauschenberg’s dealer Leo Castelli suggested he produce it as a screen print edition of 250 and sell it. (There’s a poster of this in the Tate shop that I know is going to be a sellout.) 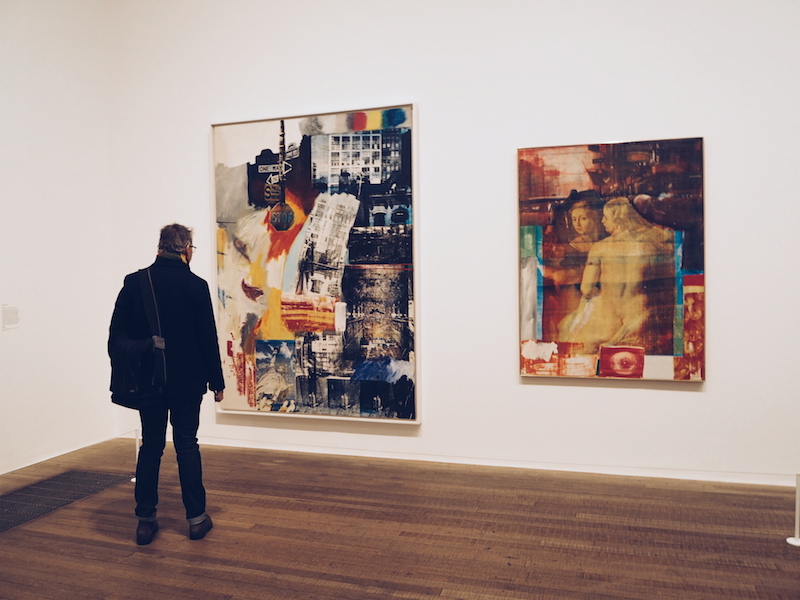 BELOW: Ace by Robert Rauschengerg 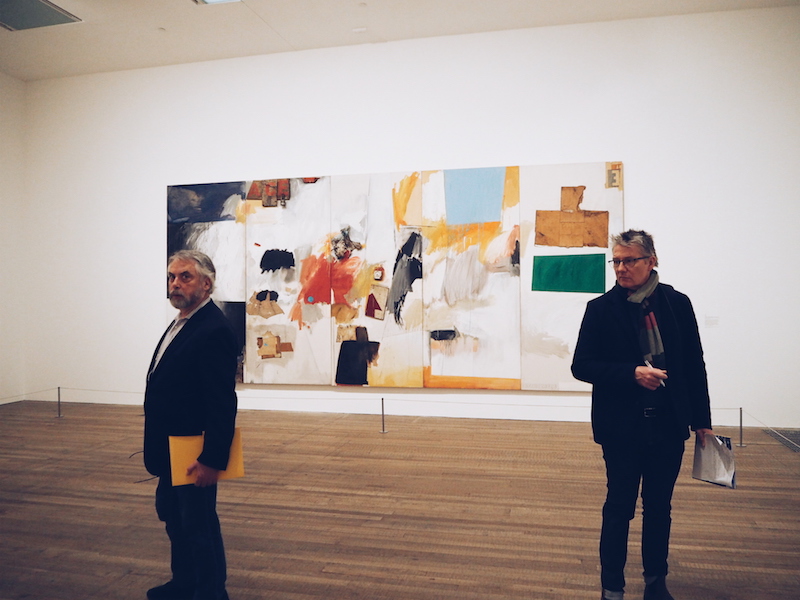 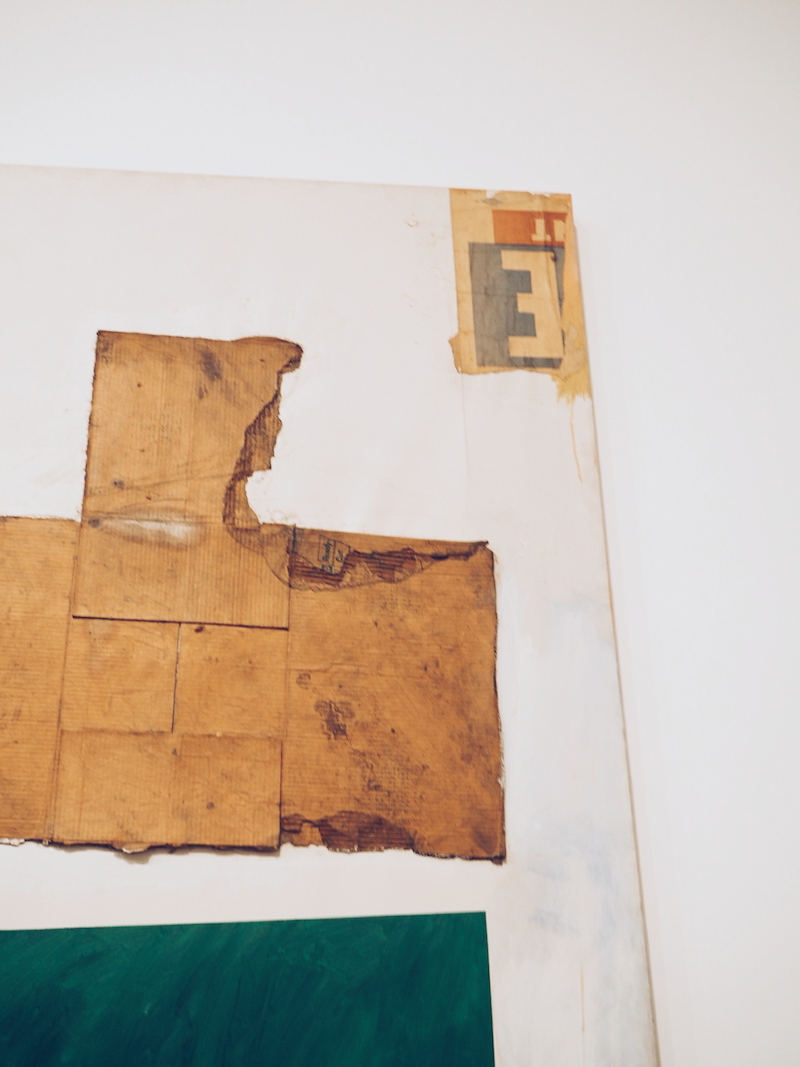 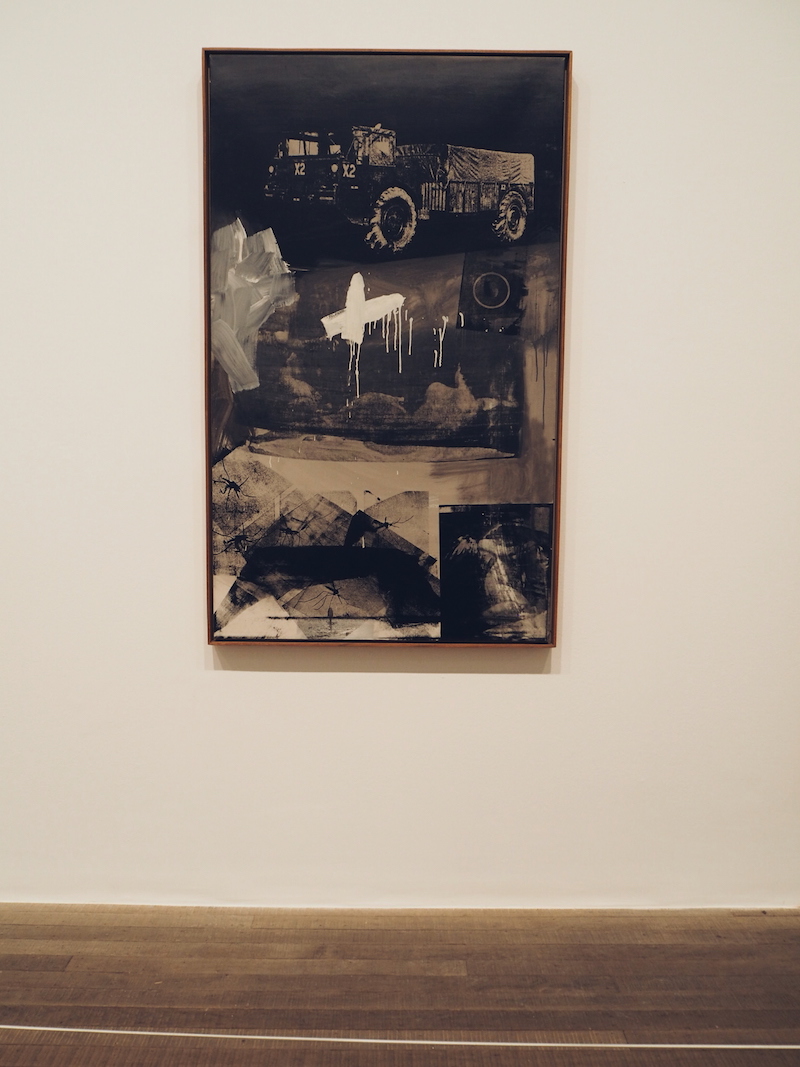 BELOW Signs, a collage originally commissioned by Time magazine 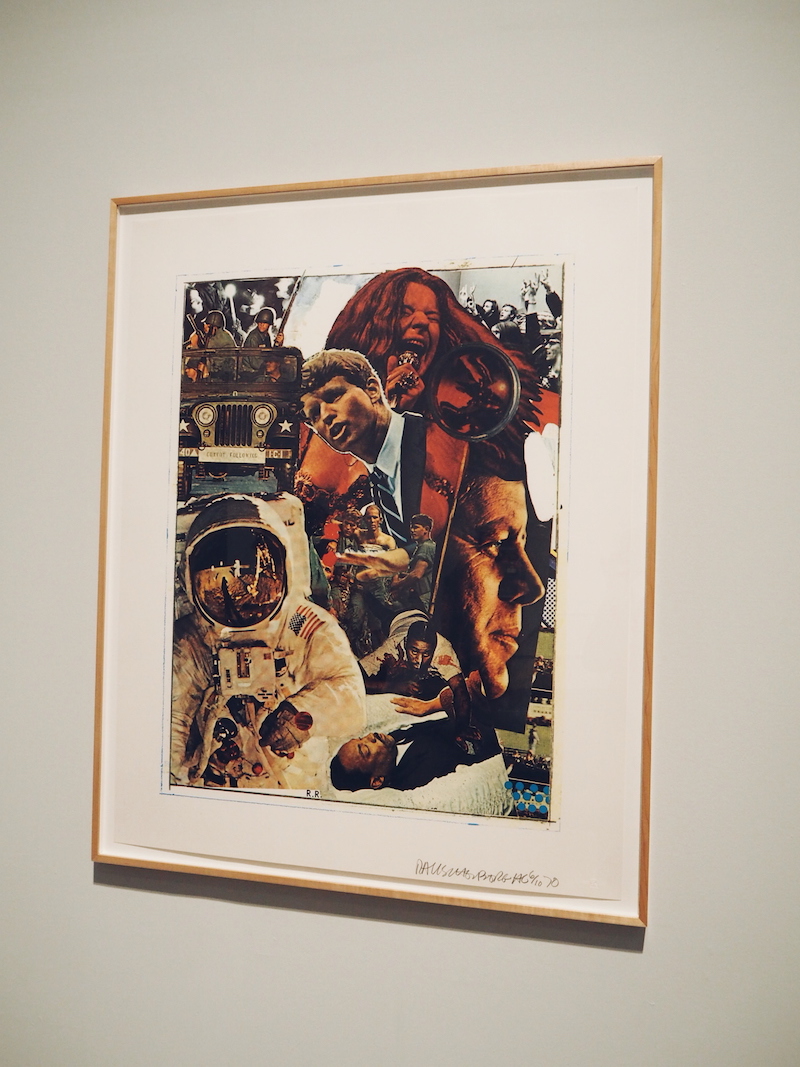 While the collage screen prints are my favourite pieces as they’re so familiar to me, Rauschenberg was never one to stick to a formula. His whole career was built on exploring and challenging the boundaries of what we consider art. He was a passionate traveller and collaborator, with performance pieces and dance pieces as intriguing as his mixed media works.

In Room 6 there are films of his rollerskating parachute piece, ‘Pelican’ and other performance pieces complete with vitrines containing set notes and lists of props and directions. And in Room 7, is a bubbling mud pool installation called ‘Mud Muse’, an electronic experiment that reflected his interest in technology, which he saw as an adventure of the modern world as opposed to the oft-portrayed idea of robots as the bad guys. 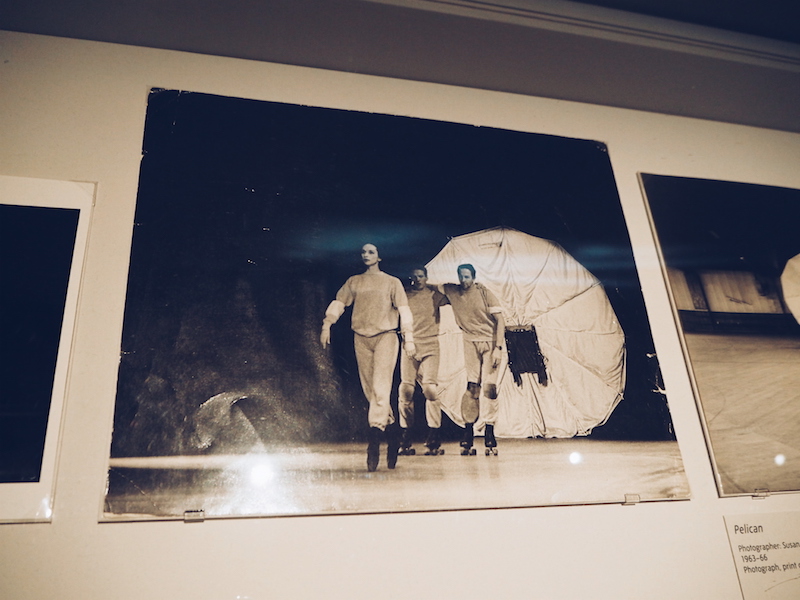 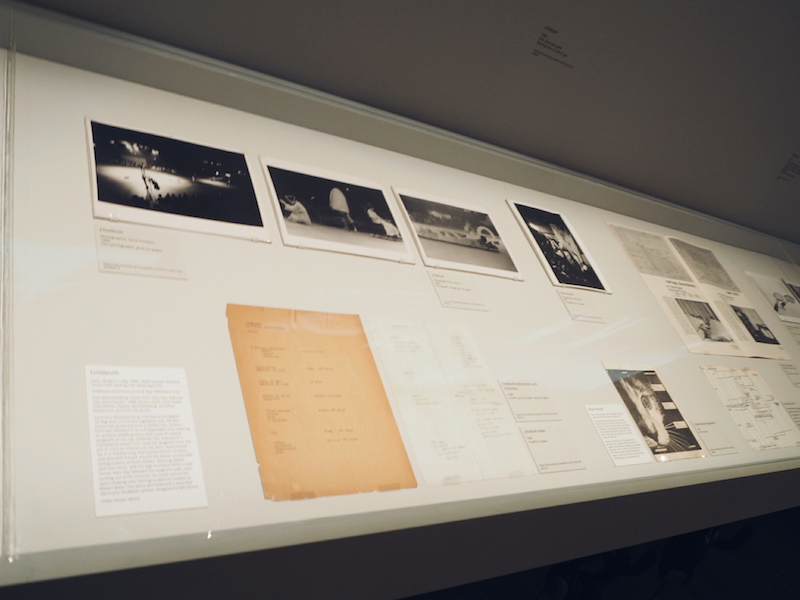 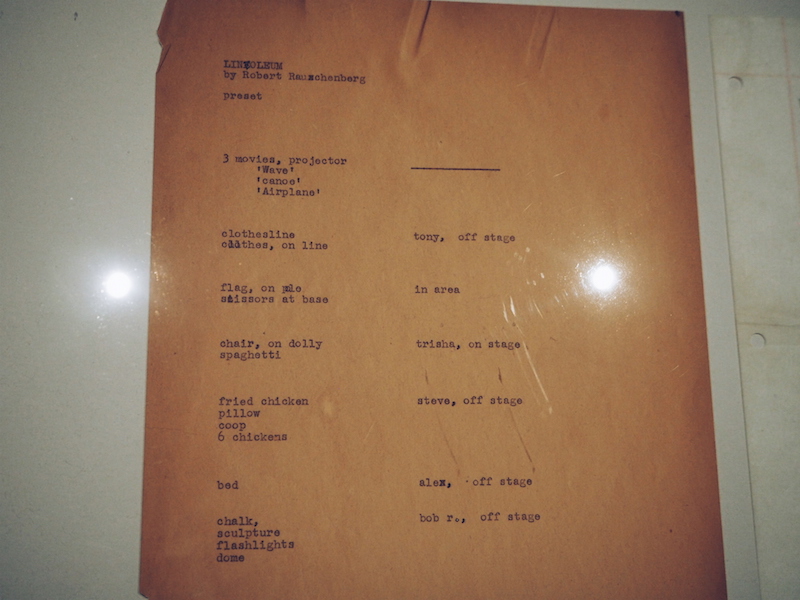 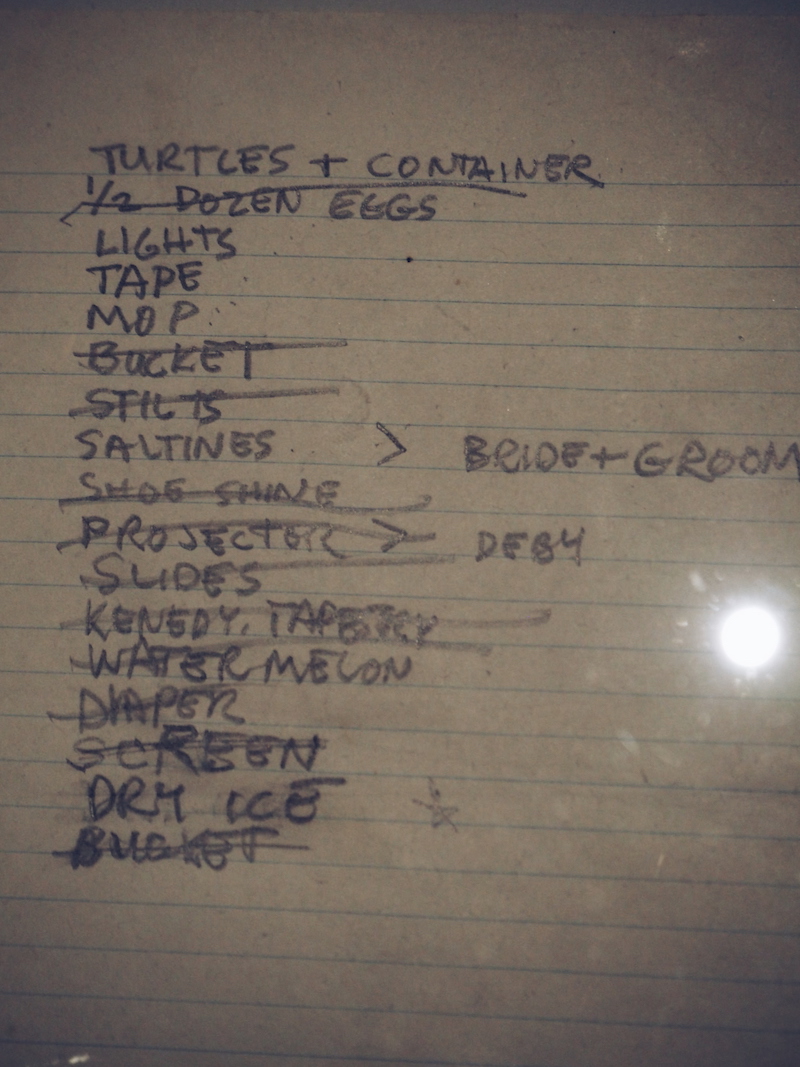 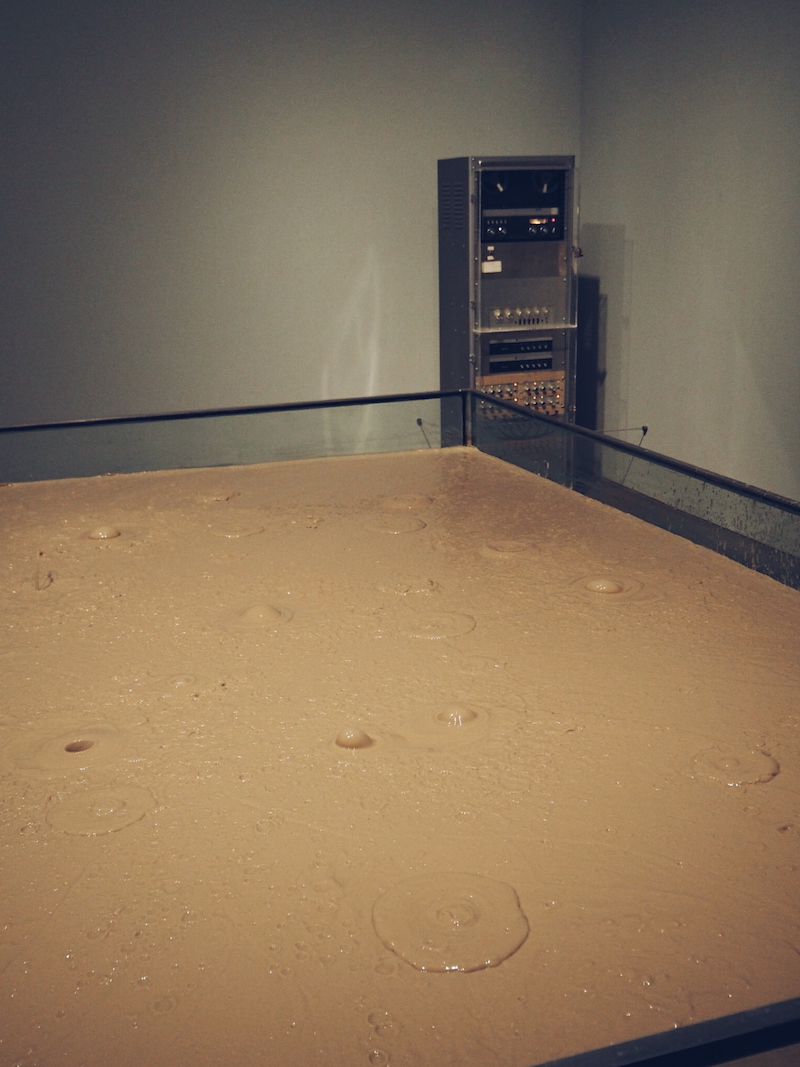 As with all great exhibitions, this one spurs you to think deeper, and want to create too. I got the urge to pick up a paintbrush and scissors (bubbling mud, not so much) and see where the pure act of creating takes me…

ROBERT RAUSCHENBERG is at Tate Modern until 2nd April 2017