Jaeger gets it right 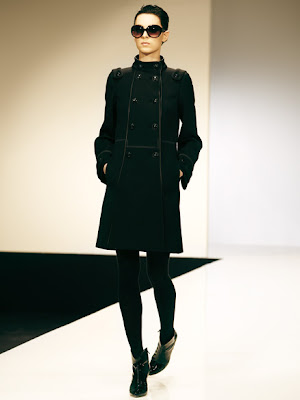 While Burberry continues to profit on its £2600 handbags (profits are up an astounding 31%), an altogether quieter relaunch is going on elsewhere in British heritage-land. Since the arrival of CEO Belinda Earl from Debenhams in 2004, the Jaeger brand has taken baby steps to haul its name into the 21st century and it looks like success could be theirs at last. Reviving a heritage brand is no walk in the park. You have to keep the traditional customers happy while trying to tempt a new generation of shoppers who, if they have £200 knocking about in their bank account would rather spend it in D & G or Marc than a fuddy duddy label their grandmother used to wear.

An attempt a few years ago to reposition the brand had Jaeger calling on the skills of Bella Freud as a consultant. As lovely as her logoed cashmere knits were, they proved a shade too directional for the genteel Jaeger customer so Freud was shown the door and the ball was set in motion again. What Jaeger has done this time around is focus the brand on four collections under the Jaeger umbrella. The main ‘Jaeger’ range is fairly safe, aimed at the old school customer who likes what the label stands for – class, quality and easy-to-coordinate pieces. ‘Jaeger London’ is the fashion-forward (but not too scary) collection which for spring/summer 2008 is big on ikat prints, Marni-esque embellishment, a bold fuchsia and black colour combo and a strong stripe that owes a nod to Missoni without blatant copying. Then – crucially – there is ‘Jaeger Limited’ which is a stepping stone between ‘Jaeger’ and ‘Jaeger London’. This features some of the prints from ‘Jaeger London’ but in simpler shapes so the older customer can feel the younger influence while keeping within their comfort zone. And then ‘Jaeger Black’ is the high end range featuring £250 chiffon blouses and forties tailoring for the confident customer who wants quality and class as well as a contemporary cut, but is happy with what Jaeger stands for and doesn’t feel the urge to upgrade to a ‘proper’ designer label.

What I think is clever and what is so hard to do is that Jaeger has covered all its bases. You can see the older glamour-type shopper here (think Helen Mirren) as well as her wannabe cousin (Barbara Windsor). You can picture your Erin O’Connors and Laura Baileys in the chiffon star prints that are on sale now (a revisited version of a Bella Freud print that Kate Moss has popularised) while the style-savvy up and comer who likes to be a bit different (Alexa Chung, Daisy Lowe) might also cherry pick a bag or a scarf – the accessories are as well thought out as the clothes. In time, especially if the celebrity take-up is high, they’ll get the WAG contingent as Burberry did, although this can be a curse as much as a blessing. Jaeger has even got a head start in ecommerce – its online store www.jaeger.co.uk was launched recently – something that not many big brands have properly delved into yet. Time will tell just how successful this revival is, but on the strength of what they’ve shown so far, it looks like Jaeger is finally back on track.