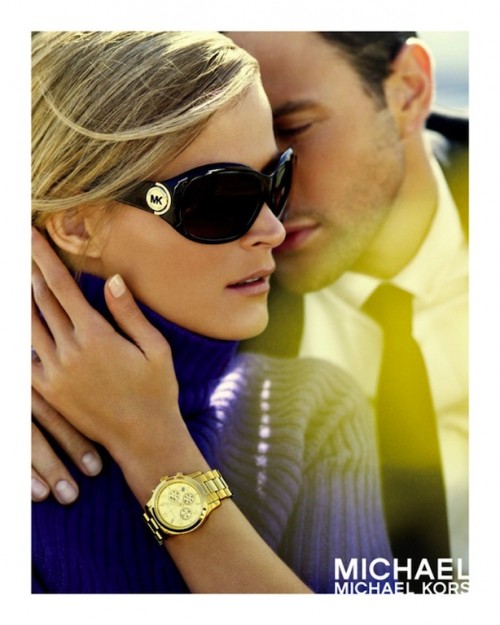 What is the deal with the Michael Kors watch phenomenon? Everywhere I look there’s another small wrist encircled by an oversized gold Kors disc. Beauty PRs and fashion assistants absolutely love them, as do twenty-something city girls. “Girls that work in the city who want a Rolex. They might not know who Michael Kors is but they know they like shiny things,” tweeted @WhistlesPR in reply to my ‘who’s buying all the Kors watches’ tweet. “It’s chunky and looks expensive but it’s waaay cheaper than my dream Rolex! It has that magpie effect on everyone who clocks it,” confirmed @saraheangus.

Watch retailer DM London, who owns the Time2.co.uk site and also buys for Asos and Selfridges, introduced Kors watches in 2008 to a tiny space in Selfridges, Oxford Street. “We saw they were a quiet burner so by the spring of 2009 we expanded out to our other locations,” says fashion watch buyer, Keira Payne Gibbs. “MK5055 [a sporty gold chrono] was an immediate best seller and remains one of the best selling watches we’ve ever had”.

Watches in general have become newly fashionable, not necessarily as timepieces but as statement-making accessories. For younger consumers, wearing a mechanical watch is a novelty, a reaction to all things digital and the more glam watches are proving the most popular. One of the strengths of the Kors brand is an ability to recognise emerging trends. “Kors honed the ‘boyfriend watch’ market themselves and based an entire case style, ‘Jet Set’, on the boyfriend style,” says Payne Gibbs. “They were also one of the first to launch entire ranges of gold plated watches just as the market began to take off. They got into ceramics just as it took off and now it’s the same with rose gold.”

With prices for Kors watches hovering around the £250 mark, they’re an easy entry-level accessory to buy into if you’re not in a position to spend £600+ on the bag or shoes. Clearly, plenty of people aren’t; according to the New York Times, sales of Kors watches went up 142% in the first quarter of this year. And good news for Mr Kors, his customers don’t just settle for one. “A Kors customer will typically have more than one and we do particularly well when new season launches,” says Payne Gibbs. “I’d say they were very loyal customers to the brand.”

SHOP THE STORY BELOW: