Bill Cunningham: “I let the streets speak to me”

I was invited to the UK premier of the Bill Cunningham New York film last week and I’m happy to report it was as good as Vidal Sassoon The Movie and The September Issue. Right from the opening frames I was hooked. This documentary captures the essence of New York, New Yorkers and the enigmatic spirit of Cunningham. For decades he has been on the streets, snapping passers-by for the New York Times, then getting his 35mm films developed at a local store. His apartment in Carnegie Hall is crammed with filing cabinets and the most basic of beds, his ‘wardrobe’ is a few wire hangers and his bathroom is a communal one down the hall. At 82 he still scoots around town on a push bike with a bumbag round his waist and his camera bag over the shoulder.

For Bill it really is all about getting the shots and all about the clothes. The film also shows him recording his commentaries for the digital version of On The Street (this week he observes how New York men are sharpening up) where he nails the week’s observations in one take. The narrative running through the film hinges on his enforced relocation from his belove Carnegie Hall apartment to a newer building, which gives the film a bittersweet storyline. But overall it’s an honest and uplifting portrait of a man and a city with glimpses of the industry and some of its colourful characters.

Bill Cunningham New York will be released in select UK cinemas on March 16. 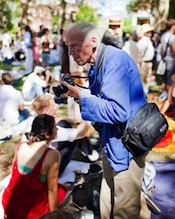 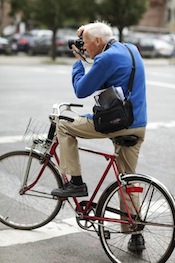 As a side note, I was rather taken with Mr Cunningham’s daily ‘uniform’ of chinos and blue-on-blue layers – Yves Klein workman’s jacket, sky blue oxford shirt and cornflower sweater-over-the-shoulders. Plus rain poncho and Sorel boots for inclement weather (which is when he gets his best photos). I’m quite partial to a rain poncho and a sweater over the shoulders myself, not to mention a bumbag or two. Ines De La Fressange paid her own homage to Bill at the couture shows a couple of weeks ago, where she donned a Cunningham-esque blue shirt and cap to photograph show-goers for Madame Figaro. Wonder if it’ll catch on? 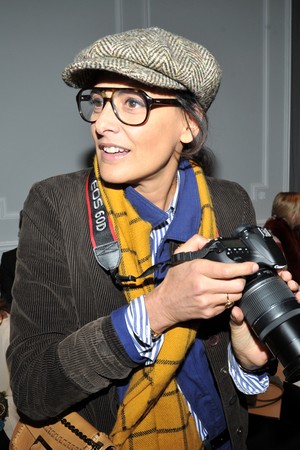