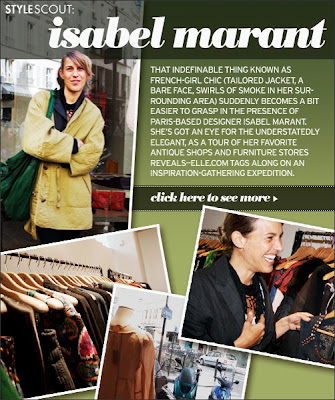 ‘When I start on a collection, I ask myself a lot of questions. I get very philosophic. I’m against consumption so doing my job—which is about fashion—is always a bit hard for me.’
Isabel Marant

This quote is taken from a gallery on Elle.com which Hebsen from Style…A Work In Progress alerted me to. I love Isabel Marant and adore her aesthetic but I can see where she’s coming from. Her look is very much the worn-in, thrown-together-just-so look which could easily be fashioned from stuff we already have…a bit of army surplus, a washed-silk blouse, an ethnic trinket. The fact is, the way she presents it makes us want to take the easy option and just buy it off the rack. I guess that’s her skill, to make us want to buy it, even though we could probably get the look without buying anything at all. 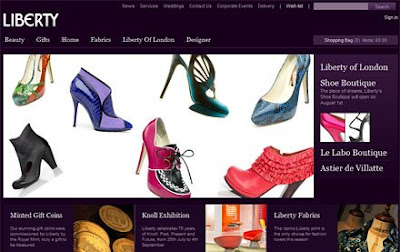 Catwalk Queen reports that Liberty has finally gone live with its transactional website after months of gentle teasing. Like many other transactional sites – Harvey Nichols for one – they’re taking things slowly, concentrating on ‘easy’ purchases like gifts, homewares and fabrics before jumping into the fray with clothing (although their shoe boutique launches on Friday). I have harped on before wondering why it’s taking so long for many stores to go online with proper stock, not just the easy options of leathergoods, perfume and make-up. Clearly I wasn’t thinking straight. Having discussed the issue with contacts at My-Wardrobe and New Look, it appears that having an online arm to your business is no breeze. In the words of my contact at My-Wardrobe, selling online ‘is like opening a whole new department store’ – it can take years.

The main issue is where to store the stock. Net-a-porter house theirs in a huge warehouse, so for a department store it’s not a matter of just taking things off the rail, otherwise as my mole at New Look explained, the rails would be permanently empty. Next is the issue of returns. In order to keep returns to a minimum, it makes sense to stock things that don’t need to be tried on, hence the success of wallets, sunglasses and – kerching! – handbags. (Even though the economy is on the slide, handbag sales are still going up.) Once the transactional site has been up and running for a while, with teething problems mostly ironed out, the clothing can then be introduced. If you think about it, launching a transactional site really needs to be thought out, there’s just no way of hurrying it up. Online users are impatient and vocal and it only takes one or two bad experiences to spell disaster. Better to think things through, take baby steps and do it properly, even if it means potential shoppers champing at the bit while they wait.

Suzanne Nelson said…
‘Re: eveyone who comments individual style is a rare thing in London – sadly they are right. Chain stores and ‘the high street’ – the main street in every town that nowadays has the same selection of stores pushing low budget designer rip-offs – is killing individual style in Britain. London for the most part has become one huge high street in terms of it’s choice of stores. Blame TopShop…’

A few months ago I might have said the same. Friends of mine who ran successful independent shops throughout the nineties then floundered through the early noughties when TopShop found its groove, admit the competition from the high street became all too much. Where once the high street consumer was very different to the discriminating customer who shopped at Start or Browns Focus, now the lines have blurred. The reason? The high street suddenly became very good at producing a high fashion look on a shoestring, making the independent designer seem vastly overpriced. But the blame can’t be placed squarely at the door of 216 Oxford Street. For starters, magazines like Grazia have their part to play by introducing high fashion to the masses and making us more fashion-aware than ever. Ten years ago, would the average girl in the high street know what a Chanel 2.55 was? Or a bandage dress, or a harem pant? Probably not. The media has introduced high fashion to a mainstream market and as a result, we’ve all become more knowledgable and discerning. On the flipside, the success of TopShop meant that it became cool for a high-end shopper to clock a fantastic find in TopShop and show how savvy she was. Same with Primark. But when everyone’s doing it, sadly it’s not all that clever any more. So what does a shopper do when she can’t buy designer cos the Look and Heat readers have muscled in on her precious labels? And she can’t do high street because everyone’s there as well? Oh, she shops vintage. But hang on, that’s in TopShop too, and everything new these days is based on vintage anyway, so that rules that out. Well, what about jumbling it all together – a bit of on-trend designer-derivative high street, a bit of under-the-radar designer, a natty vintage scarf, an American Apparel tee or two, some beat-up Converse from forever ago, all topped off with a classic Chanel 2.55. Surely that looks original? Um, not when the likes of Alexa Chung and Daisy Lowe have trademarked the look, no.

The ‘problem’ is, fashion is all around us, all the time. When designers show their collections, they’re on the internet in a jiffy and disected in detail on blogs like this. So no wonder everyone is tapping into the same looks before they’re even in the shops – when we’re all responding to the same stimuli it’s pretty inevitable. But it’s rather rich to blame TopShop for doing their job and giving us what we seem to want, they are a business after all. Fashion is for everyone and it’s a bit sniffy to complain that it’s too easily available – no one has more right to it than others. Agreed, this all-too-ready availability does make it more of a challenge to stand out but all that’s needed is to think a little more outside the box and be even more creative when it comes to styling. After all, surely that’s the fun part of fashion?

Any stylist or fashion editor will tell you that no two working days are the same but I usually think that’s a load of guff. I mean, there are some days when you don’t leave your desk – a constant torrent of emails to be answered, samples to chase up and appointments to make. Then other days consist of solid appointments to call in clothes, possibly interspersed with a press day or two. But today was a different kind of day. It began at 10am with a car sent by the BBC to pick me up as a guest fashion expert on the radio. I had a lovely amiable chit-chat with the driver who was celebrating his 27th wedding anniversary (kudos!) then spent the next hour taking live quickfire what-to-wear questions from the radio listeners and giving no-nonsense advice. It was exhausting but great fun. Even though I’m opinionated on here, I’m not usually one to dictate ‘wear this but don’t wear that’ but that’s exactly was was wanted, so instead of gently suggesting ‘maybe add a statement heel’ I had to get a lot tougher and bark things like, ‘lose that waistcoat love, it’s naff!’

That was followed by a few nibbles and a gander at the Net-A-Porter Cruise press day at the St Martins Lane Hotel. The highlights were Mint’s neon-pink pailette shift, Phillip Lim’s puff-sleeved military jacket and Richard Nicoll’s luxe, T-shirt shaped dress. New to the NAP stable for Cruise 09 are Preen, Lover and See by Chloe shoes. 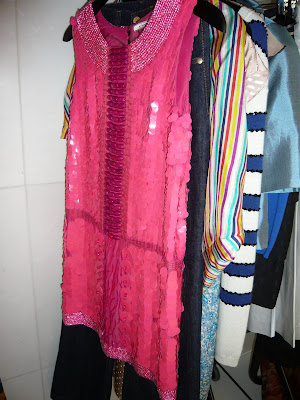 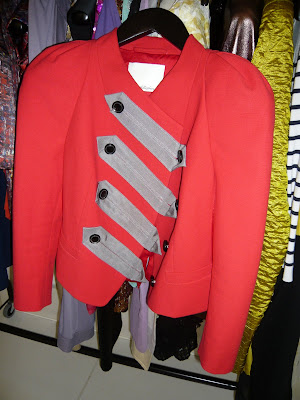 Nearby was The Photographers’ Gallery so I took the chance to check out the Fashion in the Mirror exhibition, small but nicely put-together (but I’ll do a separate post about that). Of course, I spent more time in the bookshop than taking in the exhibition but who’s complaining – I bought a novel little photo book called Prom Night by Elissa Stein full of 50s-80s prom snaps – oh there were some beauties (and horrors)! 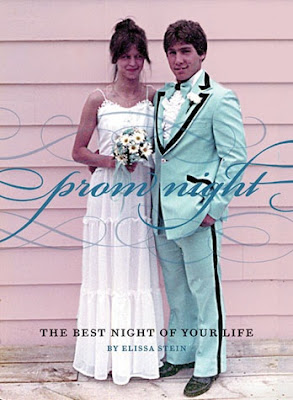 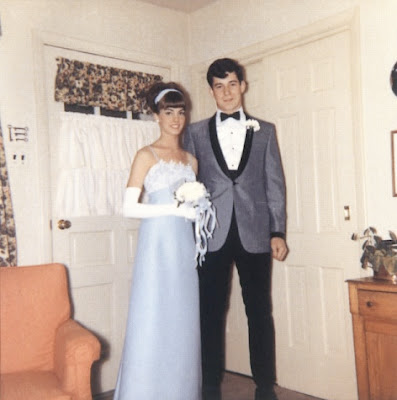 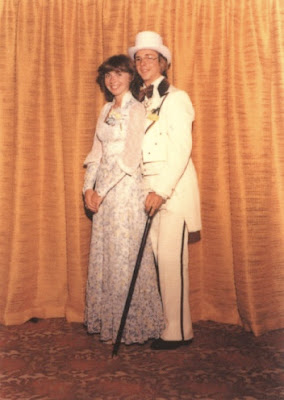 After a brisk sushi lunch I quick-marched over to the Hardy Amies Christmas press day. Now formal menswear is really not my forte and Hardy Amies is certainly not a name that’s normally on my radar but I thought I’d have a look and I’m glad I did. The mens ready to wear suits are spot on – slim trousers, narrow lapels and a great pricepoint at only £425 for a suit. Then there were some shit hot skinny ties – who knew Mr Amies was the first to do a squared-off tie? I was also shown a pair of Chelsea boots that were first designed as a collab with Clarks in the 60s and have been revisited for 2008. One more thing, did you know Amies was a former spy? Me neither!

I just had time to put in an appearance at the House of Fraser Christmas press day – lots of patent clutches and frothy prom dresses as you’d expect – before haring it to the South Bank as I badly wanted to see Waterlilies. Of course, I should have booked. I got there just in time (no thanks to the frankly criminal signposts that sent me on a wild goosechase) only to find it was sold out. Oh quel bloody surpris! But no harm done because it meant I rediscovered Albert Nyathi & Imbongi, a fantastic Zimbabwean band who were taking part in the National Theatre’s free outdoor festival. Back-story: I first stumbled upon this band on a gruesome hospital appointment two weeks ago – they were playing a mini-gig in the hossie foyer! On exiting the film-that-wasn’t-to-be, I recognised their costumes (namely the Marc Jacobs-style headbands) and dance moves from my vantage point, so spent a very enjoyable half hour rocking out to their highly contagious melodic grooves. Ain’t it funny how things turn out? 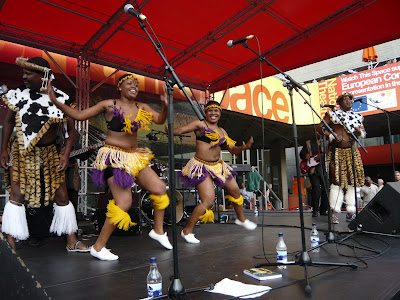