Today was the third or fourth time I’ve been to The Shop At Bluebird (www.theshopatbluebird.com) in King’s Road. This is a shop that seems to be forever under the radar, possibly something to do with its location, at the Worlds End end of King’s Road. It has a great mix of lesser known labels (Alexander Wang, Danielle Scutt, Charles Anastase) mixed in with well-loved labels like APC yet it’s always quiet and I kind of feel it should have more recognition. When I go to Dover Street Market, I’m impressed at the layout and the merchandise but somehow I never feel like buying anything (which is just as well, it ain’t cheap). Here, I just want everything in sight. There is also beautiful jewellery of the thin-chain-with-delicate-charm variety that I can’t resist, as well as a fabulous book section. I don’t know why I’m complaining, Bluebird is like a secret shop to me but at the same time I want it to do well. If you’ve never been I’d recommend it.

Interesting news that Hedi Slimane has left Dior Homme. The genius designer has been making too many demands on LVMH and so they’ve passed the baton to Kris van Assche from Belgium. Like the demise of Helmut Lang and Jil Sander, this marks the end of an era. Even if Slimane decides to launch his own label I doubt it will be remembered in the same way as Hedi Slimane For Dior Homme. During his time at Dior, Slimane pioneered a whole new lean and youthful silhouette for men, much like Giorgio Armani did with his unstructured menswear in the eighties. Collectors, best start snapping up those remaining bits of Dior Homme, they will be like gold dust from now on.

I’m always intrigued at what point an I’m never wearing that’ trend becomes mainstream. There seems to be four stages. The first is the catwalk stage when someone super-influential such as Miuccia Prada (the ‘off’ colour combinations and icky long grey socks), Calvin Klein (the frumpy knee-length skirts with flats in the mid nineties) or Marc Jacobs (those sick patchwork LV bags that cost about ten grand) rocks a look that on first sight seems so wrong you are just convinced it will never see the light of day. The next stage is when the high-end magazines, stylists and style setters give the trend the nod. In this day and age the next stage is the most crucial when the celebrity set latch on to the look whether or not with the help of their stylist. A celeb wearing a tricky trend in its early days marks them out as brave and garners them column inches, even if it’s a negative reaction. From this stage it’s a hop and a skip til the high street takes on the look, especially now that people are more style savvy and actively want to push the fashion envelope. The high-waisted look championed by Chloe and Kate Moss was a case in point. For someone who does not want to attract attention to her bum or tummy there was no way I was going to embrace high waisted. Or so I thought. A few months into the trend I spied an A-line denim button-through skirt in H&M, a nice seventies mid-blue, very Chloe with braided belt loops and the now-ubiquitous high waist. Hmm, I thought, that could look nice with my oxblood stack heeled Frye boots if I hold my tummy in. I tried on the 8. A bit too snug on the hips and being a shortie, my top was too long killing the proportion. But I couldn’t give it up. I took it home for a try with said boots. Still Not Quite There. I bought a 10. Another try-on at home. A few different tops were summoned. Dammit, I would make this work! But no, a high waisted skirt on a short-arse makes one look dumpy, frumpy and schlumpy! So I admitted defeat and took them both back. However big a trend there’s just no point forcing it if it’s not working for you. But good on those brave few who did the experimenting for the rest of us in the first place. If it wasn’t for them we would never try anything new and would be forever stuck in a style rut. 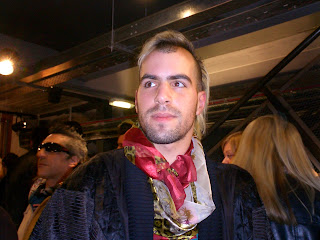 This evening I went to another shop opening, the new Wrangler store was unveiled in Carnaby Street. Is there even room for another jeans shop? Hell yes maam. Wrangler have been trying to reinvent themselves for a while and this time look set to succeed. It was nice to see some interesting looking characters out. This guy might not be everyone’s cup of tea but I’m loving those silk scarves!